A Touch of Spice (Politiki Kouzina) 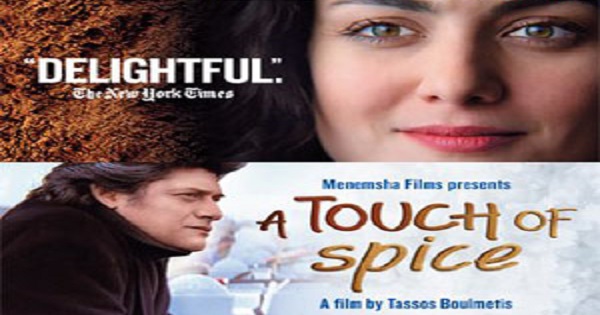 Get it at Amazon.com

A Touch of Spice is the English subtitled version of the 2003 Greek film Politiki Kouzina (Political Cuisine). The film is based in Constantinople (today Istanbul) in 1964 during a period of civil unrest between Greeks and Turks in Cyprus. In an attempt at pressuring Greece to bring the Greek Cypriots to the negotiating table, the Turkish government instituted a series of repressive measures against Greek communities living in Turkey. One of those measures was their immediate expulsion from Turkey, and the confiscation of their property. Seven year old Fanis (George Corraface) and his Greek family, who permanently resided in Istanbul, were one of the families that were given the shocking news that the Turkish government was deporting them to ‎Greece.

Fanis initially has trouble adapting to his new life in Greece. He constantly reminisces about life in Constantinople‬ where he grew up as part of the Greek minority of the city. He recalls his happy upbringing in Turkey, and the fond memories of being around his grandfather Vasilis who owned a general store that specialized in food spices. It was through these spices and the wisdom and mentoring of his grandfather, that Fanis was taught about the solar system, among other things. And it's here that Fanis developed a connection with his childhood sweetheart, a Turkish girl called Saime.

Three decades later, and Fanis who by now is an accomplished astronomy professor, travels back to Constantinople to visit his home town. While much has changed, his childhood neighborhood is still there, as is his grandfather's spice shop, albeit disused. Fanis is also reunited with Saime.

A Touch of Spice revolves around cooking and food, and in particular spices. But it's more than that. The film touches on the effects of an uprooting on a young child. It is a film that brings up the issue of nostalgia for one's home, and while time can bring about change, a longing for one's home always remains.