The Exchange of Populations Between Greece and Turkey 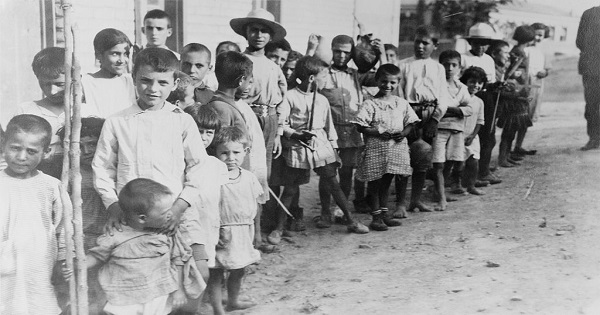 Greek and Armenian refugee children near Athens, Greece, in 1923, following their expulsion from Turkey.

The compulsory exchange of populations between Greece and Turkey occurred over a number of years, the effects of which are still evident today. The Convention concerning the Exchange of Greek and Turkish populations was signed on the 30th of January 1923 during the Lausanne Convention. The population exchange was to take effect on the 1st of May 1923, however by that time, most of the Orthodox Greeks living in the Ottoman Empire (Turkey) had already fled. The exchange therefore only involved the Greeks of central Anatolia (Greek and Turkish speaking) and the Greeks of Pontus, who had not yet had the chance to flee, a total of roughly 189,916.1

In 1914, Turkey comprised roughly 2,700,000 Greeks. By the time the Exchange of Populations was to officially take effect (1st May 1923), 1,000,000 Greeks had fallen victim to genocide at the hand of the Turks, 500,000 had fled before the Greek Army's defeat in the Greco-Turkish War and the subsequent burning of Smyrna (Sep 1922), and the remainder fled in scenes of indescribable panic from the Western Shores of Asia Minor when the victorious Turkish forces entered the city of Smyrna (9 Sep 1922), set fire to it, and began massacring its Greek and Armenian population. As a result, tens of thousands of Armenians also fled to Greece.

The exchange was based on religion rather than ethnicity and accounted for approximately 1,300,000 Orthodox Greeks of the Ottoman Empire relocating to Greece, in exchange for roughly 355,635 Muslims living in Greece going to Turkey. The Muslims of Western Thrace and the Greeks of Constantinople were exempt from the exchange.

In 1922 at the request of the Greek government, and with the approval of the League of Nations, Dr Fridtjof Nansen a Norwegian scientist, humanitarian and Nobel Prize Winner (1922) was assigned the task of organizing the transfer of the huge number of Greeks fleeing Turkey.

The exchange was a humanitarian problem especially for Greece which was faced with an influx of over a million refugees, two thirds of which were destitute of all resources.2 The land and houses of the Muslims which were to leave Greece were used to house some of the refugees, but hundreds of thousands were still homeless. On the other hand the Muslims who were transferred to Turkey found a larger number of abandoned Greek homes to live in, so their repatriation was comparably smoother.

To assist with the refugee resettlement a number of organizations were formed or were called upon for assistance. At the end of 1923, Henry Morgenthau was made chairman of the League of Nations inspired Greek Refugee Settlement Commission to assist resettlement. The International Committee of the Red Cross contributed with relief work for the refugees both in Turkey and in Greece. The Near East Relief also provided care for the refugees.

A 1926 report3 undertaken by the League of Nations listed the number of refugees as follows...

It 's worth stressing that although 1,300,000 Greeks are mentioned in many texts as being the number 'exchanged', the number of Greeks actually exchanged was only 189,916.  The majority of Greeks fled before the 1st of May 1923, and did so in scenes of indescribably horror. Unfortunately many authors use the total number of Greeks involved in the Exchange and fail to stress that the majority actually fled and were in no way exchanged. The Convention concerning the Exchange of Populations between Greece and Turkey which was signed on the 1st of May 1923 was conducted with the purpose of saving the remaining 189,916 Greeks from certain persecution/death at the hands of the Kemalist government which no longer wanted Orthodox Greek Christians within the newly formed Turkish nation.

A few facts about the Exchange

- The exchange was compulsory.

- During peace discussions following the Greco-Turkish War, Turkey demanded the expulsion of the Christians remaining in Turkey, with the Muslims living in Greece.4

- The exchange involved Greek refugees from Asia Minor and the Pontus, Eastern Thrace, the Caucasus, and Bulgaria.

- The International Mixed Commission established by Article 11 of the Lausanne Convention transferred under its auspices 189,916 Greeks to Greece and 355,635 Muslims to Turkey during 1923-1926.

- A large number of charitable organisations provided relief with the British and Americans being prominent.

- By 1924, 50,000 Greeks of Constantinople decided to leave despite being exempt from the exchange.

- By November 25, 1924, the number of Muslims which had arrived in Turkey from Greece numbered 353.000. Many went against their will. They lived peacefully in Greece and did not want to be uprooted to a war ravaged Turkey.5

- As almost all Greeks from Western Asia Minor had already left the country, the population exchange mainly involved the transfer of the Central Anatolian Greek Orthodox (Greek and Turkish speaking; the Karamanlides) and the Pontic Greeks.

- The Turkish problem was far less serious than the Greek, partly due to the smaller number of the refugees and partly to the fact that the Turks had been successfully massacring and expelling Greeks and Armenians for some years which had left an abundance of free land available in Anatolia (Turkey).

- The exchange officially ended in 1929.

The Convention concerning the Exchange of Greek and Turkish Populations