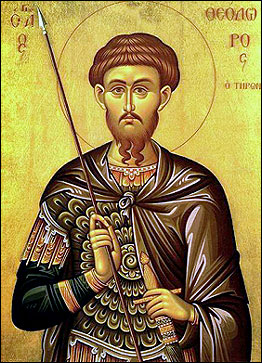 Saint Theodore of Amasea is said to have been born in the East possibly in Syria or Armenia. He died in 306 in Amasensus in Pontus (now Amasea, Turkey). The Eastern Orthodox church honors him on February 17 while the Catholic church honours him on November 9. He is one of the Greek military saints of the 4th century and the earlier patron saint of Venice. He is often named Theodore Tyro (of Tyre) which according to some is because he belonged to the Cohors Tyronum while others believe it's because he was a tire (recent recruit).

After enlisting in the army he was sent to winter quarters in Pontus. During the reign of Emperors Diocletian and Maximian an edict against Christians was issued and Theodore was brought before the magistrates at Amasea and ordered to sacrifice to the state gods. He refused and was offered time for reflection but was later burned at the stake when it was found he used this time to burn the Temple of Cybele.

In the 12th century his body was transferred to Brindisi in Italy where he is honoured as a patron, while his head is enshrined at Gaeta in Italy. There are churches which bear his name in Constantinople, Jerusalem, Damascus and other places in the former Christian East.