The Holy Virgin-Martyr Helen of Sinope 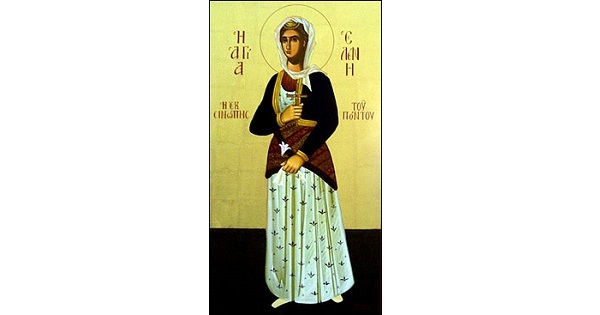 The Virgin-Martyr of Christ, St. Helen, was the daughter of the Bekiary family and lived in the 18th century in Sinope, the oldest city of Pontus. Her parents brought her up with Christian values and instilled in her a love for Jesus Christ. She was 15 years old when her mother sent her out one day to buy embroidery thread from the shop in Kryonas. On the way, she passed the house of Ukuzoglu Pasha, the Turkish Governor of Sinope, who saw Helen from his window. The Pasha ordered that she be brought to him. He attempted to defile her two or three times but he was pushed back by an unseen force. Throughout the ordeal, Helen was silently praying, reciting the Six Psalms.

The Turk ordered that Helen be imprisoned at his house but Helen managed to flee. She ran home and her parents were very alarmed to hear what had happened. Ukuzoglu summoned the Sinope Council of Elders (the leading members of the Greek community) and threatened that he would massacre all the Christians of the city if they didn't bring Helen to him. The elders met at the Greek School of Sinope, called for Helen's father, and asked him to hand over his daughter for the sake of the others. After breaking down in tears, her father finally agreed that his daughter be sacrificed so that a general massacre would be avoided. Like another Abraham , he was obedient to the will of God. Once in his possession, the despicable Ukuzoglu Pasha again repeatedly tried to defile her, but again an invisible wall around the girl was impeding, thus driving him back. The holy maiden was praying fervently, secretly reciting the Six Psalms, which she had learned from her uncle.

The Pasha tried to gratify his passions many times but was always forced back by an invisible wall. Frustrated, the Pasha threw the maiden into a humid cell in the common gaol. He finally ordered that she be tortured and put to death. The executioners drove two nails into her skull and cut off her head. Her holy body was put in a sack and thrown into the sea, but instead of sinking, the martyred one's body floated and a heavenly light beamed upon her relics. Her heavenly body floated until it reached Gai where it sunk to the bottom of the sea. Several days later, a Greek ship dropped anchor at Gai and the ship's guard noticed a bright light coming from the sea bed. The ship's captain sent divers to the bottom of the sea thinking that the light was a treasure of gold. Instead the divers found a sack containing the holy Relics of the Holy Virgin-Martyr Helen. Inside the sack was the head of the Saint which was cut off from the rest of the body. At the crown of the head was a nail and also another hole made by a nail. It was clear that after having tortured her, the Turks drove 2 nails into her head and decapitated her.

The captain secretly took the precious head of St Helen to the church of the Panagia at Sinope, and placed the remainder of her relics on board another ship that was leaving to Russia with Greeks on board. The precious head of the Saint worked many miracles especially for those of the faithful who suffered from headaches. During the Exchange of Populations between Greece and Turkey in 1924, the president Christos Kafaropoulos took the holy head of St Helen to Greece and placed it in the Church of the Holy Great Martyr Marina in Ano Toumba, Thessaloniki.  It is still kept there today where it is said to be giving off a fragrance and working miracles to the Glory of the Lord and God Who is glorified in His Saints.

-The Holy Virgin-Martyr Helen of Sinope,Pontos. Metr.Cyprian of Oropos and Fili.
-The Synaxarion The Lives of the Saints of the Orthodox Church , Volume 2, Holy Convent of the Annunciation of Our Lady Ormylia ( Chalkidike ) 1999.