Formation of the First Greek Settlements in the Pontos 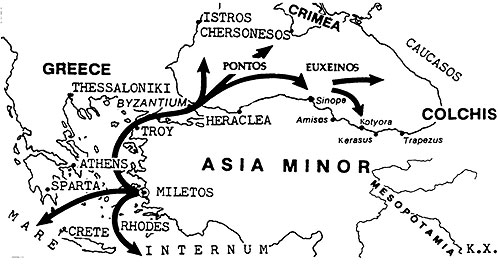 According to Liddell and Scott's An Intermediate Greek-English Lexicon, the word Pontos stands for the sea, especially the open sea. In time, the word Pontos became associated with the north-eastern portion of Asia Minor that borders the Black Sea (see Map 1).1  The Greeks first called the Black Sea, Aξεινος πóντος (inhospitable, unfriendly pontos), but later it was called Εϋξεινος πóντος (hospitable pontos) when they became aware of its wealth in the lands around it.2

The ancient name Πóντος Εϋξείνος, has the distinguishing characteristics of a hybrid name, part Greek and part Iranian. The Greeks took both parts to be Hellenic, but they also recognised an earlier form, which they took to mean its opposite, ‘inhospitable' (äξεινος i.e. axenos). However, after studies in the early 20th century, it has become generally accepted that axenos was itself a borrowing into Greek from an Iranian root αχšαēnα meaning dark.3

The Greeks appear to have known about the Black Sea as early as the 13th century BC. This view is based on early Greek legends such as Jason and the Argonauts who set out to find the Golden Fleece in Colchis (modern Georgia, see Map 1). The earliest Greek trade with the lands around the Black Sea was reflected in the Greek legends about the origin of iron.4

Also, the mythical Amazons were believed to have lived in northern Asia Minor, at the mouth of the Thermodon (Terme) river, although an alternative version states they lived on the Tanais (Don) river in southern Russia.5

In the late 11th-10th century BC the Ionians (and subsequently the Dorians and Aeolians) migrated from mainland Greece and settled in the Aegean islands and the western coast of Asia Minor (Ionia), where they founded 12 cities.6 Ancient written sources seldom mention reasons for Greek colonisation, but where they do, the emphasis is always on forced emigration and conflict.7

An obvious example of forced migration is from Ionia, a very wealthy region where Miletos (see Map 1) was the main city. From the second half of the 7th century BC, its eastern neighbour, Lydia, expanded taking Ionian territory. At this time, Ionia began sending out its first colonies. In addition, from the middle of the 6th century BC, the Achaemenid Empire began to conquer Ionian territory and then, in the wake of the Ionian revolt in 449-494 BC, laid it waste. There was a shortage of land and food, but this was not from overpopulation, but from a loss of resources to a conquering foe and external difficulties provoked internal tension between different political groups, especially in Miletos.8

In the Natural History of Pliny the Elder, Miletos was supposed to have founded 90 colonies on the Pontos and the Propontis. This, is an exaggeration, but it proves the fame of Miletos as the pioneer of colonisation in the Black Sea.9 However, Miletos was the principal coloniser of the Black Sea, founding its first colonies there in the last third/end of the 7th century BC.10

The territory of Miletos was almost completely lacking in mineral ores. However, the south Pontic region was well endowed in these ores. In relation to commodities such as copper, gold and iron, there were alternative sources in the Mediterranean, yet it was the Black Sea that Miletos appeared to colonise so intensively. Likewise, grain could be sourced from a number of regions, of which the Black Sea was only one. Perhaps, like grain, in times of crisis, metals were too important to rely on a single supply source. Other commodities which the Black Sea region may have traded in, included timber (and charcoal), fish and slaves. However, all these items are archaeologically ‘invisible'.11

A slightly contrary view states the Black Sea was not rich in metals, as has been supposed, and that the Milesian colonies had access to plenty of natural resources close to home. Also, in the Pontos the Greeks did not plant crops known to the locals, instead they planted familiar crops, which they brought with them.7 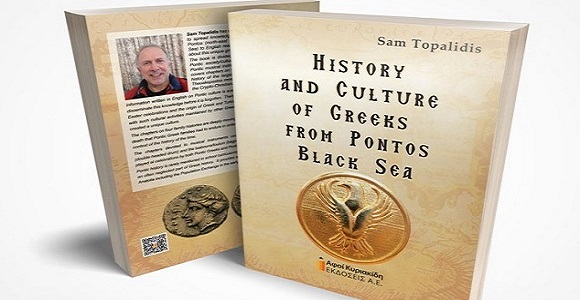 In the written historical sources, it is unclear exactly when the Greeks appeared on the southern Black Sea coast. However, Greek pottery from the Halys valley (between Sinope and Amisos, see Map 1) proves the Greeks had contacts there long before the foundation of the coastal cities. Iron Age settlements testify to significant cultural exchange in the late Archaic period (Archaic period c. 750-550 BC). Sites along the Halys basin yielding Greek pottery and architectural terracottas apparently show that the Greeks paid special attention here. The reason was due to this valley's abundant resources such as red pigments and other minerals.12

The Milesians drove out from Sinope the weakened Leukosyroi. Sinope then conquered land from the natives to the east for her colonists.13 The Greek settlers in Sinope and Amisos had to deal with the indigenous population from the beginning of their colonial activities, since their survival depended on access to the native territory to obtain agricultural products, valuable minerals and metals. The presence of local pottery in Sinope and Amisos suggests that the native Syrians and Cappadocians respectively formed a part of the populations there. These cities may have been founded over the already existing settlements or they could have received people from the surrounding area.12

The Pontic coastline provides very few natural harbours, with the notable exception of Sinope. Its harbour, and its rocky peninsula provided a naturally strong defensive site with a rolling hinterland stretching some 30 km to the south, which provided ample arable and pastoral land to support the city.15

There are inconsistencies between archaeological research of the Black Sea region and dates of its colonisation based on ancient literary sources. For example, archaeological excavation in Sinope has so far produced nothing earlier than the late 7th century BC.16 Sinope's foundation date is quite confused in written sources. According to legend, it was founded in about 756 BC, but it was destroyed by the Cimmerians and refounded by Milesians in about 631 BC. (A critical re-evaluation of the written sources in the light of archaeological material is needed, as archaeologically researchers are not able to distinguish a Cimmerian culture.) Sinope had little access to trade links with central Anatolia. Its main orientation was towards the rest of the Black Sea.17

Little is known of Sinope after its colonisation until it was under a tyrant, Timesileos, who was driven out c. 436 BC by Athenian intervention under Pericles. A contingent of 600 men was sent there to consolidate Athenian influence and democracy.18

Amisos was founded around 564 BC on the site of modern Samsun. Ancient authors permit two interpretations: a purely Milesian foundation, or a joint foundation by Phocaea and Miletos. The archaeological evidence from Amisos just adds to the confusion. No proper excavation of the settlement has been conducted because of modern overbuilding.19 Amisos had intensive links with central Anatolia and looked more inland than across the Black Sea.20

The city of Amisos, constituted an emporium for the produce of the plateau. The low barrier of hills to the south of it rises only to a thousand metres. The hills come down to the sea for a short distance on either side of Amisos and then, on the eastern side, the coast opens up into a wide plain formed by the deltas of the Iris and the smaller river Thermodon (Terme).21

Amisos lies 165 km east of Sinope. It possessed no fine harbour; nor was it near the mouth of any major river. Its main assets were iron, probably traded from the Chalybes. Its lands produced olives, some local silver from the Pontic mountains, and the overland route across the so-called isthmus of Asia, which led to Tarsos.22

Kotyora is similar in pattern to the other Greek settlements. It stands at the head of an inland route with two wide deltas to the east, which provides ample food supplies, and its sheltered beaches are overlooked by an acropolis.23 Xenophon (c. 400 BC) stayed outside the walls of Kotyora for 45 days. Xenophon states Kotyora had a governor appointed by Sinope and was in the territory of the Tibareni.14

Kerasous' great rocky peninsula provides with Sinope the best defensive site along the coast. As a harbour and anchorage, it has little to recommend it. The hinterland of Kerasous does not offer extensive arable and pastoral lands, which extend around the towns further westward. It seemed likely therefore, that defense was the prime consideration for the choice of Kerasous as a site. Possibly the historical importance of the town was largely due to it serving as the outlet for the alum exports from Koloneia (Şebinkarahisar)24 located 220 km to the southeast.

Xenophon (c. 400 BC) visited Kerasous for 10 days with his Greek army of 8,600 soldiers. Xenophon stated Sinope had taken away the land from its natives and given the land to their colonists for which Kerasous paid Sinope regular tribute. The food in the houses of the Mossynoeci, at Kerasous, consisted of loaves of bread, corn, pickled dolphin, dolphin fat, chestnuts and wine.14

The Armenian version of Eusebius (Eusebii Chronicorum Libri Duo, ed. A Schoene, Berlin, 1866) provides a date for the founding of Trapezous of 757/6 BC, which is wrong. Eusebius was actually referring to another city in the Propontis.25 (According to the Catholic Encyclopaedia Online 1999, Eusebius Pamphili was a Greek Christian writer born about 260 AD who became the bishop of Caesarea in Palestine.)

In 400 BC, Xenophon with his Greek Army of 10,000 soldiers visited Trapezous, an inhabited Greek city, for about 30 days and stated that it was a colony of Sinope. The people of Trapezous gave Xenophon's army presents of oxen, barley and wine.14

From Xenophon's text, The Persian Expedition, several indigenous peoples who lived near Trapezous in 400 BC can be identified. These indigenous peoples included the Taochi (north of Erzurum), the Chalybes (around Gumushane), the Scytheni (further west), the Macrones (behind Trapezous) and assorted Colchian tribes at the coast.26

The Archaic Greek colonies along the southern Black Sea coast were quite small and often situated on peninsulas. If these initial sites have not survived, the main reason could be due to the rise in sea level. Along the Black Sea coast the sea level has risen several times in antiquity, and it has risen by a further three to four metres since the first century CE.27

Our current knowledge about major Greek cities and local peoples, mainly in the Archaic period (c. 750-550 BC) along the southern coast of the Black Sea includes, not many Greek cities were established in this large area, due to the local geography and the unfriendliness of many local peoples. Also, archeologically, we do not know much about these Greek cities, primarily because they have been built over by modern towns and cities, modern road construction and reclamation works, which have destroyed what, had survived until now.28

17 Tsetskhladze, GR 2007, ‘Greeks and locals in the southern Black Sea, littoral: a re-examination' in Greeks between east and west: essays in Greek literature and history in memory of David Asheri, (eds G. Herman and I. Shatzman), The Israel Academy of Sciences and Humanities, Jerusalem, pp. 165-7.

I wish to thank Professor Tsetskhladze for kindly sending me some of his archaeological papers on the Black Sea.