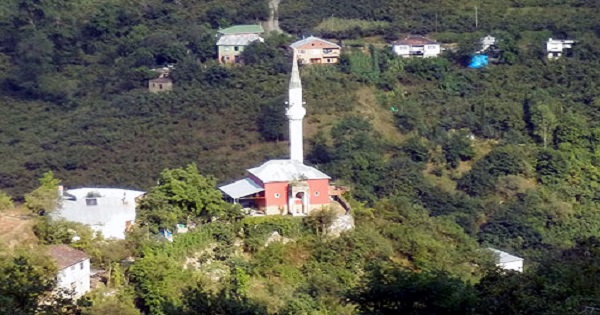 Situated approximately 6km south west of Maçka is the village of Hamurya or Hamouri (Grk: Χαμουρή) today Sukenari.  And located within the village is the church of Hamurya which today exists as a mosque. According to the website hamurya.com the mosque was a church prior to the exchange of populations between Greece and Turkey in 1923 when Orthodox Christian Greeks were living in the village.

A sign at the entrance to the mosque states that the mosque was built in 1340 on the Islamic Rumi calendar which translates to 1924 on the Christian calendar. But this is incorrect. Local village elders have confirmed that the mosque wasn't built in 1924. In fact nobody lived in the village from 1927 up until the 1930's. The elders say that it was a church prior to 1924 and is possibly upwards of 200 years old. It was registered as a mosque in 1924 but was not a functioning mosque until the 1970's when the conversion took place.

Before its conversion there were many Christian murals on the inside walls of the church. Only one photo exists today (pictured below) of a mural inside the church, the remainder having been covered over with white paint during the conversion. The original entrance to the church was closed up and a new entrance was built on the north side of the building. At the time of the conversion in the 1970's half of the roof was missing and was repaired. A second level was added within the building in the 1990's.

Today, the mosque is only open during Summer for Friday prayers which attract around 10 people. For the rest of the year it remains closed due to a lack of visitors. Yusuf Karabacak, a local of Hamurya told us that such a building should not be lost in time but should be preserved for future generations. He says that many churches in the region are collapsing due to negligence, and theft from treasure hunters. He says that it would be more beneficial to the local region if the mosque were turned into a museum to improve tourism and ensure its survival. 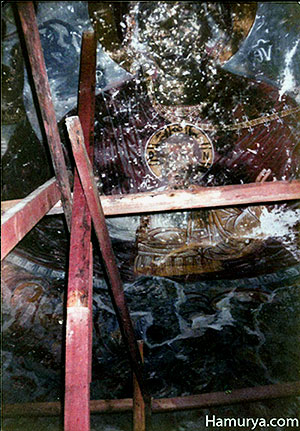 The only photo in existence which shows a Christian mural inside the converted mosque. Taken before the 1970's conversion.

According to the Encyclopedia of Pontian Hellenism, prior to 1923 Hamouri was a purely Greek village where 300 people lived. It had a primary school and 2 churches.  According to the Infognomon Pontus travel guide, Hamouri was a purely Greek village of 300 people with a 6-grade primary school and 3 churches: the church of Saint John Prodromou, the church of the Virgin Mary (Panayias) and the church of Saint George tou Matomenou. Infognomon states that Saint George Matomenou is still standing and that fleeing Greeks took the icon of Saint George with them when they fled to Greece.

PontosWorld sent Infognomon a photo of the surviving church of Hamurya and asked if this was the Saint George Matomenou which they claim is still standing but we did not get a reply. We therefore can't state with any certainty which church this is. If anyone can help us with any information, please contact us.

Hamurya.com has also advised us of a Pontic wall built pre-1923 that also exists in the village and the face of a man carved into the side of a rocky mountain dating pre-1923 also. 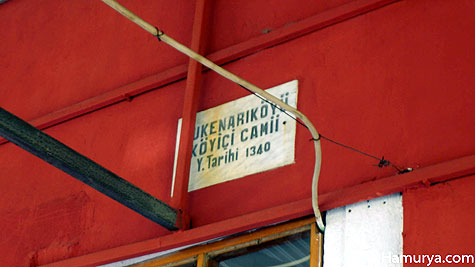 A sign at the entrance to the mosque which incorrectly states the build date of 1340 (Rumi calendar). 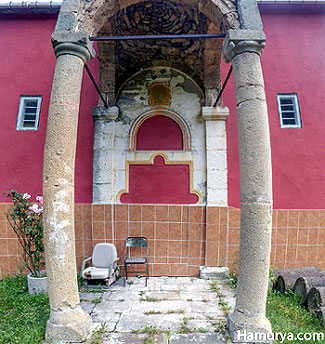 The original entrance of the church now closed off. 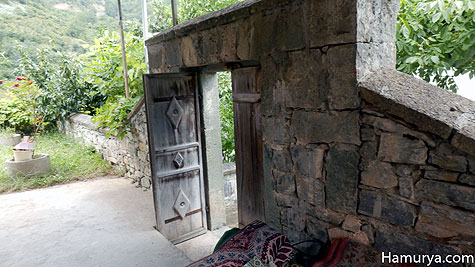 The entrance to the church yard is still in good condition