The Girl and the Rainbow 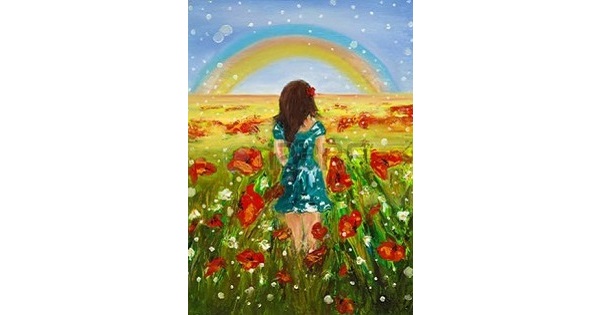 This is what happened, every time. Once the rain had stopped and the sun had peered through the clouds, its first job was to light the rainbow. A huge colourful arc would then embrace the horizon from end to end, always away from the stunned people’s eyes on earth. This picture unfolded in the sky for ages, yet, each time it was as if it happened for the first time. It was the arc of the sky, each time as beautiful and as magical as in its first time. It was hard to resist and not look at this colourful half wreath of the sky, which was a revelation of all secrets hidden in the sunlight. And the question, always so intense: how could so many colours be suddenly found up in the skies, even lined up in such a harmonious line, as if each of them knew its place in the hierarchy of the universe? One would think that they had come to relieve people after the heavy clouds that had stolen their light. This was the sun's gift to earth and to its people. A mystery of the nature, many would say. A miracle, others said. Even though science was trying to refute them, they would insist to see it as a mystery, since no one had ever been able to come near it.

No single neighbourhood on the globe was left unvisited by the rainbow. No one could complain about it. There was only the permanent complaint of children, who were never able to overtake it. Run they may toward it, it would go away from them. The legend had it that, whoever managed to pass under the rainbow, then, if it were a boy, he would become a girl and if it were a girl, she would become a boy. It was narrated as a tale in the neighbourhoods, by word of mouth, but no one had ever heard of someone who had succeeded.

Little blue-eyed Dimitra used to hide every time she saw the rainbow. She did not want to become a boy. She loved to dress with her colourful long dresses and comb her long hair under the sun. She boasted of her stature which, as she matured, emphasized more strongly her femininity. The more she grew, the more “donts” and “musts” she would face around her. Then again, these “donts” and “musts” were not so many for the boys of her age.

“You have to be careful. You are a girlˮ

She had to be careful about how she dressed, how she sat, how she behaved and about much more for which her brother had never heard a thing. Same thing at school: Always “donts”, always “musts”. And the worst part was that she could not play as freely as boys did. Oh, all those long skirts to the ankle, which did not let her move as easily as a boy. Nor could she stay in the game a little longer after dusk, like boys did; nor could she participate in the carnival with boys. And every so often, she would hear:

“You should not think like that. You are a girlˮ

How terrible!!! Even thinking about it made her guilty. Her desires were as if in violation of the neighbourhood rules. That phrase, “You are a girl”, had stuck around her neck like a noose.

But why... why..? What was the harm done by girls and they had to be so punished? For everything that could broaden a bit her freedom, there was a “must” blocking her way. And what was worst, this situation was not only limited at school. The more she grew, the more “You are a girl” she would hear. In puberty, games became almost forbidden for her. Be late at night was a sin. Virtues for girls were embroidery, sewing, cooking, house cleaning and what was associated with short-range activities around the house. However, Dimitra had been born free and could not bear absurd daily clichés of “respectability”. Everything that happened around her would spin in her mind, but she could not find a solution. The only consolation left was the huge hug of the old fig tree, where she could hide and think freely, without “musts” or “donts”. And when the weather was dull, her heart turned black and her thoughts blurred.

It was on such a day, with drizzling rain and clouds that had covered the whole sky, when Dimitra nestled again in the arms of her fig tree and was thinking, puzzled.

“Impossible. There must be a solutionˮ

And then - how did it come to her? - she began to fill her lungs with air, as much air as possible, and to blow hard towards the sky, wanting to clear away the heavy clouds. She blew and blew with great persistence, but the clouds would not make way. Dimitra continued to fill her lungs with air and blew many times, until she was dead with fatigue. Finally, the clouds obeyed, or rather were afraid, when they saw her so determined, and began hastily to drop aside. The sun, which bode its time for such an opportunity, slipped through the frightened clouds and began staining again the dome of the sky with brilliant colours. A huge rainbow was spread conqueringly on the other side of the sky. And it was not like any other rainbow that had until then visited the Earth. From the first moment it was clear that this rainbow had a special mission. Dimitra, who formerly trembled when eyeing this bright arc, now understood that this rainbow was the opportunity the sun offered her.

she said decisively, and stretched out her hands to grab a sun ray that was pointing the rainbow.

What a chariot it was! Surely, there would be no other faster than this on the whole universe. Dimitra did not even have time enough to see what changed around her, so fast she was running riding on the light. And without even realizing it, she arrived so close to the rainbow she was always afraid of. It was now certain that the rainbow could not resist the sun ray, tried as it may to go away. The children of the neighbourhood had never been able to reach it, but now this had nothing to do anymore with kids. Faced with the sun ray, it was very weak. Dimitra did not even manage to blink her eyes and, suddenly, she was bathed by the glow of thousands of colours. A river flooded from colours had embraced all of her body. Not even in fairy tales princesses were bathed with so many colours. It must have been the moment she passed through the rainbow. She could not explain otherwise how so many colours were to be found around her. In moments, the colours all went out with the same rush they had lit and then, on the other side of the river of colours, the girl landed in a village that did not look at all like her own village, or like any of the neighbouring villages she had ever visited. However, the oddest was that she was no longer a girl. Gone in an instant her long hair and those gorgeous skirts! She had become a boy like all other boys in her village. She was not surprised, though. This last time, her desire to become a boy was so deep, that this transformation came as a gift from heaven. Too bad there was nowhere a mirror to look herself in.

However, the great joy of the boy came to a stop as hunger had already started to torture him. He had to find soon something to eat, before collapsing. He made it to the village, where his path led him to the first welcoming hut. There lived an elderly man with his wife and two daughters. They were much surprised facing the unexpected visitor. They had never seen in their village this boy. They offered him what was good in their house, and when his hunger had calmed, they started to ask him how he was found in their places. But what could he tell them? Would they believe him, if he told them about the rainbow? So he preferred to tell them that he was lost and that he was looking for some hosting shelter.

The landlord and his wife looked each other and, in the first place, it did not even pass through their minds that they could keep the boy at home for a long time. But then, they thought it again. They were both old and they could no longer bear the heavy chores. Their girls, on the other hand, were not used to outdoors tasks. It was obvious that a boy could be very useful to them. So, they kept the unknown boy in the house who, starting from the very next day had to help them with the heavy tasks. The landlord had registered in his mind all those works where the boy would be useful, and began to give him the first directions.

“You ate well, you drank well, and you rested well in my house. Now you have to help me with works that I can no longer manage. You are a boy, you canˮ

The boy had no objection and at dawn was thrown to work. First, it was to milk the goats, then he had to go to the mountain to carry firewood, and at dusk to gather the goats in the corral. At night, he did not even have appetite to eat from fatigue. He fell dead on his straw mattress. But, in the morning, new errands awaited him.

“You did well yesterday with the chores. I was right when I thought we should keep you. You should not have any complaints, either. You both ate and drank and rested in my home. Now you have to help me with the ploughing, that I can no longer manage. You are a boy, you canˮ

Before dawn, the boy yoked the animals and was directed to the field. The iron ploughshare engraved the soil, groove upon groove, and the field was making ready to accept in its bowels the coveted seed. But in a little while, the sun began to beat down; sweat bathed the body of the boy, witnessing his big fatigue. The bell of vespers rang, but the boy still toiled in the field. When it got dark, he came home dragging his feet from fatigue. His straw mattress could no longer help relax the long-suffering boy. All his body was in pain, like shots of stabbing pain reaching to the marrow. His sleep was equally excruciating. He could not bear such a life any longer. Sometime, he awakened and started shouting, while crying mournfully.

His cries were so powerful that they were heard by his mother at home. Then she, seeking upset her child, ran to where the voice came from. And she was not wrong. The voice came from the fig tree, the hiding place of her child.

“Dimitra, my child, O Dimitra! I've told you a thousand times that you “must” not sleep under the fig tree. Its shadow is heavy and you have a disturbed sleepˮ

Fortunately for Dimitra, that rainbow too was like all others that had until then visited Earth, distant and inaccessible.

Giannis Haritantis is an author and academic of Pontic Greek descent from Drama in Greece. He studied Physics at the University of Thessaloniki and later majored in Electronics. For many years he was Professor of Electronics at the University of Patras. His first literary work was titled Οδός Ευξείνου Πόντου (2008) and since then he has made numerous contributions to our website. Some of his books can also be viewed at SmashWords.