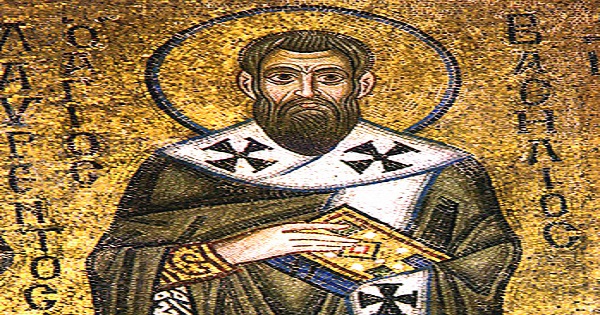 Saint Basil the Great of Caesarea was an influential theologian who was born around 330 AD. Some say his birthplace was Caesarea (today Kayseri) in Cappadocia while others believe he was born at Neocaesarea in Pontus, in modern day Turkey. He was known for giving away all his possessions to the poor, the underprivileged and to children. He died on the 1st of January 379. In Greek tradition he brings gifts to children on January 1 (St. Basil's Day). The Vasilopita, a sweet bread with a coin hidden inside it was named after St. Basil and is consumed on January 1. It is said whoever receives the slice with the coin will receive the blessings of Saint Basil for the coming year. The two Christian saints identified with Christmas are Saint Nicholas of Myra (western Santa Claus) and Saint Basil the Great (eastern Santa Claus).

Basil was born into a wealthy Greek family four years after the Christian faith had been formulated at the Council of Nicaea. He owed his earliest religious education to his grandmother Macrina who brought him up with his brothers. Macrina had herself suffered for the Christian faith having been driven from her home and forced to take refuge in a forest among the mountains of Pontus where she stayed for seven years. Basil's parents had 10 children. Of their five sons, three became saints; Basil, Gregory of Nyssa and Peter of Sebaste. His father, a lawyer and renowned rhetorician sent him to be educated at Caesarea which had excellent schools. The education he received was Greek. He then furthered his education in Constantinople and Athens. Even at this early stage, Basil had a reputation for intellectual and religious excellence.

Basil spent two periods in Pontus. The first a little over a year (358-359) and the second between 362-365. After his studies around the year 357, Basil returned to Caesarea and entered upon the path of an ascetic life. He then traveled to Egypt, Syria and Palestine to meet the great Christian ascetics and upon returning to Cappadocia decided to distribute his wealth to the needy. In 362 he was ordained deacon and in 364 was ordained to the holy priesthood. In 370 Saint Basil became the Bishop of Caesarea. Basil used all his personal wealth and income from his church to benefit the destitute and needy and built homes for the poor, the wanderers and the homeless.

Book about Saint Basil the Great