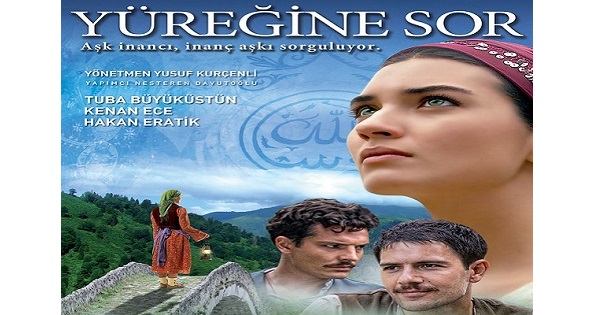 Directed by Yonetmen Yusuf Kurcenli, Yuregine Sor (Ask Your Heart) is a true story about a woman of Muslim faith (Esma) who falls in love with a Crypto-Christian (Mustafa).  Prior to 1856, Christians had fewer rights than Muslims as citizens of the Ottoman Empire. For that reason, many Christians chose to practice Islam in public and Christianity in private.

"Some of the Greeks living in the highlands of Trabzon/Maçka and Gümüşhane; hard to reach remote villages such as Krom, Yağlıdere, Stavri, Zigana, Santa, Torul, had to show themselves as Muslims, mainly to avoid paying heavy taxes. They were forced to convert to Islam in the 17th century but as they kept their faith in Christianity secretly, they are known in history as hidden/Cryptic Christians."

Mustafa's family belonged to such a Christian family, and so the revelation of Mustafa's true religion creates a dramatic and unique kind of love story.

It's believed this is the first film of it's kind in Turkey where the existence of crypto-Christians is considered somewhat taboo.