Truth: Punishment Be Thy Name

"Our society has traumas that we are avoiding."

Under Turkish Penal Code
Article 301
the judge stares down
at the gray-haired man
with fear-filled eyes
and a worry-line
buried between his brows,
he trembles before the cadi1,
who shrills—
"The State charges...

"for willful revelations
"of buried truths—
"you are hereby...."

A permeating pause chills the air.
The judge's gavel reverberates
through the courtroom
as his voice grows louder,
and louder—

Jarred from his nightmare
the defendant cringes
as the judge roars

Voices of truth;
be they publishers, authors,
historians, Nobel Prize winners,
poets, priests, journalists,
translators, scientists—
no matter what their age.
Even those who are dead,
are not exempt!

Two zapieths2 grab his arms
and lead him away
into the police car
parked outside the court,
its motor running—

the defendant will be transported to
an F-type prison,3
in windowless isolation.
If he survives,
he'll remain there
for the next eight years.
His punishment for
bringing truth to the light
—the light they call "unTurkishness."4 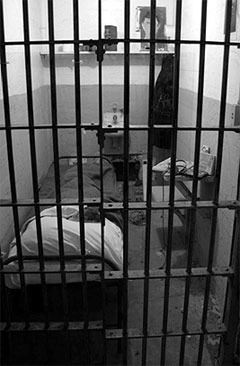 2  zabieths Turkish for guards or police.

3 F-type prison: When prisoners come out of isolation, sometimes they have forgotten everything. It has caused hearing, sight, and balance problems. It's been reported that sometimes the guards attack the visitors.

Anything deemed by law as 4 "unTurkishness" is punishable.

The above poem was inspired by the following news report:

GERMANY AND THE ARMENIAN
MASSACRES.

The character and extent of Ger-
many's relation to the massacre
of the Armenians are impress-
sively indicated in the memoirs of Mr.
Henry Morgenthau, the American Am-
bassador at Constantinople for some
years prior to February, 1916, when he
resigned and returned to Washington.
Still more brutally implacable
towards the Armenians was the Ger-
man Naval Attaché in Constantinople,
Herr Humann, a personal emissary of
the Kaiser. In reply to American pro-
tests, Humann said the Turks had to
protect themselves, and from that
point of view they were entirely justi-
fied in treating the Armenians as they
were doing. Various attempts were
made to prevent Mr. Morgenthau
publishing particulars of the crimes.
While his son, Henry Morgenthau,
jun., was on a visit to the Gallipoli
Peninsula, Gen. Liman von Sanders
(the German commander) remarked to
him:-"Your father is making a great
mistake in giving out the facts about
what the Turks are doing to the
Armenians. That really is not his busi-
ness." A German Jew from Berlin,
Dr. Nossig, apparently on behalf of
the Embassy, waited twice on the
Minister and advised him that his pro-
tests would be useless, and that the
Turkish Government was contem-
plating asking for his recall. He
added, "All of us Jews, are proud of
what you, a Jew, have done, and we
would hate to see your career end disas-
trously." Morgenthau retorted that
he could think of no greater honour
than to be sacrificed because he, a Jew,
had been exerting all his powers to
save the lives of hundreds of thousands
of Christians!
Mr. Morgenthau observes that when
Turkey decided on the deportation and
massacre of her subject peoples, espe-
cially the Armenians and Greeks, she
signed her own economic death
warrant. "These were people who
controlled her industries and her
finance and developed her agriculture,
and the material consequences of this
great national crime began to be
everywhere apparent... As the
Armenians and Greeks were the largest
taxpayers, their annihilation greatly re-
duced the State revenues, and the fact
that practically all Turkish ports were
blockaded shut off customs collec-
tions." Regarding Germany's war
aims, the American Embassy was in-
formed by Enver Pasha (who had been
enlightened on the subject by Gen.
Falkenhayn) that the Kaiser's main
purpose was to achieve the Pan-
German "Mittel Europa" ambition.
The things on which the German
leaders had definitely settled were the
dismemberment of Serbia-which
would practically disappear as an inde-
pendent State-and a complete un-
hindered route from Berlin to Con-
stantinople and the East. After finally
leaving Turkey, Mr. Morgenthau
journeyed to Copenhagen via Berlin.
En route he obtained further light on
the German attitude towards the
Armenian massacres. Admiral Use-
dom, who had been captain of the
Kaiser's yacht, the Hohenzollern, told
him that the Armenians were in the
way, that they were an obstacle to
German success, and that it had, there-
fore, been necessary to remove them,
just like so much useless lumber!
"One would never have guessed from
his remarks that the lives of a million
human beings had been involved."
Although he is a native of Germany
(he was taken to America at the age
of nine years by his parents), Mr. Morg-
genthau expresses deep abhorrence of
Germany's conduct in the war. The
proof which he supplies of her passive
acquiescence in the most extensive and
demonical massacre of modern
times, and the many independent
records of her active policy of fright-
fullness on land and sea for four years,
must have weighed heavily in the judg-
ment pronounced against Germany by
the Peace Conference.
***