The History of the icon of Panagia Soumela 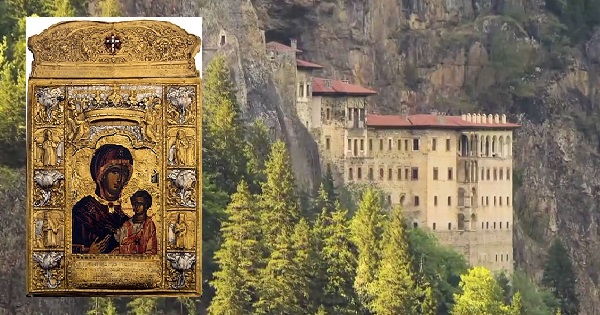 At Trapezunta (today Trabon) in Pontus, built on a high rock, is the Holy Monastery of Panagia Soumela. Etymologically, the name of the monastery is derived from the name of the mountain it's built on which is called Mela. In Greek, ‘stou mela' means ‘at Mela', and in the Pontic dialect it is pronounced ‘sou Mela'. Hence, Panagia at Mt. Mela. The existing icon of Panagia Soumela was iconographed by the Evangelist Luke who was both a physician and an iconographer. According to tradition, whenever Luke drew icons of Panagia, the Holy Mother was very pleased and blessed his works.

Furthermore, she encouraged him to draw more icons. When Luke died, his disciple named Ananias, took the icon and transferred it to the Church in Athens dedicated to Panagia. The icon was venerated as Panagia Athiniotissa.

Two Athenian monks were called by the Virgin to follow Panagia Athiniotissa from the Church in Athens to Mount Mela in Pontus of Asia Minor, a region in current day Turkey. Their names were Barnabas, and his acolyte Sophronios. At Mt. Mela, the icon was found at the end of the fourth century A.D. in a cave, and the monastery was built at this place to the glory of God. The icon was renamed ‘Panagia Soumela'.

The monastery was inaugurated by the Bishop of Trapezunta in 386 A.D. During the decline of the Byzantine Empire, the monastery was a centre of education. The monastery was pillaged many times but was always rebuilt, with the latest construction occurring around 644 A.D. Trapezunta was occupied by the Turks in 1461 and so was the monastery. Despite these difficult times, the monks remained in the monastery unshaken in their faith and tradition. The monks in the monastery were finally forced to flee in 1923 following the barbaric period of the genocide of all Greeks in Asia Minor including Pontus. Before fleeing the monastery, certain items were buried in the front yard of the Church of St. Barbara which was built at a short distance from the monastery by Saint Sophronios. The little church was only one kilometre from the monastery. These items were the icon of Panagia Soumela painted by the Evangelist Luke, the handwritten Gospel copied on parchment by St. Christopher, and the Holy Cross with the honorable wood donated by Emperor Manuel Comnenos. This event took place in August of 1923. 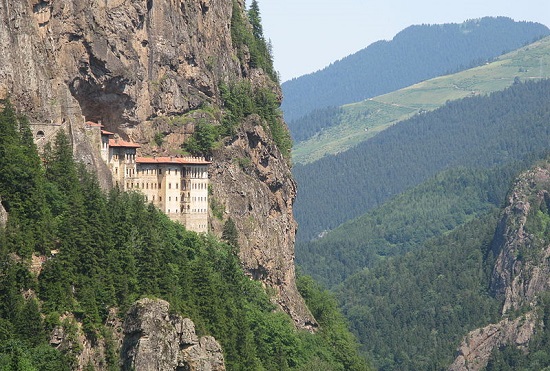 The Holy Monastery of Panagia Soumela in Pontus

In 1931, on the feast day of the Dormition of the Theotokos at Mega Spelion (the Great Cave) of Kalavryta, Peloponnesos in Greece, many people gathered for this great feast day. They gathered to pray before another icon of the Evangelist Luke, Panagia Speliotissa. Amidst the crowds were many Pontic Greeks and the Greek Prime Minister, Eleftherios Venizelos (1864- 1936). Metropolitan Polycarp of Xanthe mentioned the hidden icon of Panagia Soumela to the Greek Prime Minister. Upon hearing this account, Venizelos was touched and made a promise that he would do whatever was possible to retrieve the icon. During the same year, Eleftherios Venezelos met the Turkish Prime Minister Ismet Inonu, and asked for his permission to send monks to the Mt. Mela monastery to retrieve the icon and the other sacred treasures. Father Ambrosios, who was one of the monks of Panagia Soumela, was chosen by the Metropolitan Chrysanthos of Trapezunta to undertake this special journey. Father Ambrosios set out to go to Turkey on October 22, 1931. Upon arriving at the sacred site, Father Ambrosios was moved with tears. The laborious task of excavating began. Turkish soldiers and Greeks helped, including Father Ambrosios. Soon the hidden icon was unearthed along with the other sacred objects. They were all returned to Athens and deposited at the Benaki Museum in Athens for 20 years.

In 1950, Dr Philon Ktenides encouraged fellow Pontic Greeks in Greece to build a new church for Panagia Soumela. The church was built on a site amid the Macedonian mountains in Greece. This site was Kastania of Vermio. It was chosen because it reminded Dr Ktenides of the wild and natural beauty of the heights of Mt. Mela in Turkey.

In 1951 the icon was transferred from the Benaki Museum to Kastania in Macedonia. The miraculous icon was enthroned at Kastania on the 15th of August 1952. Even though the new home of the icon is called the Monastery of Soumela, there are no monks or nuns who live in this remote mountain site. The Church of the Dormition may be visited by pilgrims and tourists. Every year on the 15th of August which is the feast day of the Dormition of the Theotokos, thousands of pilgrims from around the world travel to this Monastery at Mt. Vermion to venerate the holy icon. The original Soumela monastery in Turkey, is also accessible to the pilgrim and tourist. The monastery's four story façade remains in good condition, although the back is destroyed. Located at an altitude of 1,200 metres, it is a magnificent structure. It clings to sheer basalt wall, high above green forests and a mountain stream. Many of the sacred icons have suffered as targets from desecrators and graffiti scribblers. The monastery once upon a time housed 72 cells, guest quarters, an aqueduct, small chapels, icon room, library and dormitories. 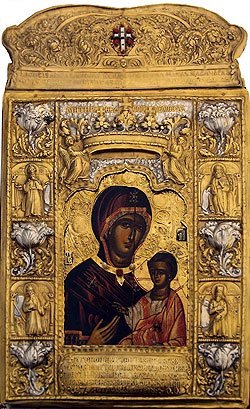 Many Pontians in Greece have migrated to Australia. In Victoria alone there are 35,000 Greeks of Pontic descent. In 1972, the President of the association Panagia Soumela in Melbourne, George Papadopoulos traveled to Kastania in Macedonia. He met the Executive Committee of the Panhellenic Holy Foundation of Kastania Veroias. He expressed to them the long heartfelt desire of Pontic Greeks living in Australia to have a copy of the holy icon of Panagia Soumela to venerate. This noble request was met by the Greek authorities and a copy of the icon was presented to George Papadopoulos on October 1972 in Thessaloniki, Greece.

On the 8th of June 1982, the copy of this historic icon was presented to His Grace Bishop Panteleimon of Theoupolis, (the Greek Orthodox Bishop of Melbourne at that time). Every year on the 15th of August, the icon of Panagia Soumela was brought for veneration by all Greeks in Melbourne to the Greek Orthodox parish of St. Nicholas in Yarraville. The late Father Antonios Amanatidis, who was the founder and parish priest of St. Nicholas during that time, was a Pontic Greek by descent. He saw this gesture of having the icon brought to St. Nicholas parish as a move towards uniting the various Pontic clubs in Melbourne.

In 1992, a new Greek Orthodox parish was being built in East Keilor, Melbourne. His Eminence Archbishop Stylianos (primate of the Greek Orthodox Church in Australia), wanted this church to be named the Dormition of the Theotokos Panagia Soumela due to the fact that many Pontic Greeks lived in the area. The icon of Panagia Soumela was enthroned (placed) into the newly built Church of Panagia Soumela East Keilor on Sunday 4th May 1997. The Church was officially opened on this day. At the moment, the Church is triune (which means that it also has two chapels, dedicated to St. John the Theologian, and our Holy Godbearing Father David of Euboea). Many Pontic Greeks flock to the Greek Orthodox parish of East Keilor every year on the 15th of August. (the feast day of the Dormition of the Theotokos).

References
1.Rev, Fr. Anthony G. Krinas, Panagia, Theotokos 110 icons, 40 feasts and Paraklisis, Melbourne, Australia, 1998
2. The Lives of the Monastery Builders of Soumela , A translation from the Greek of THE GREAT SYNAXARISTES OF THE ORTHODOX CHURCH, Holy Apostles Convent , Colorado, 1991.