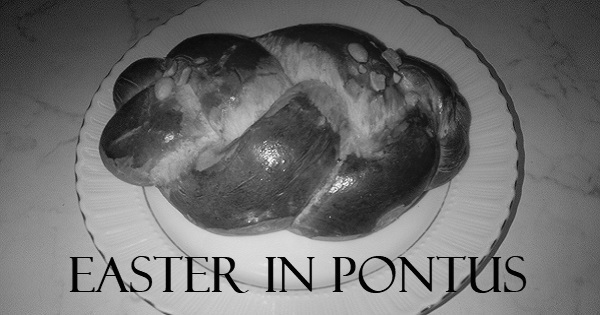 In Pontus, Lent or Sarakosti (40 day fast) started on Clean Monday. Starting the night before, children kissed the hand of their grandfather, grandmother and their father and mother. They embraced and kissed their brothers and sisters. On Clean Monday, those who were devout in their faith went to church, performed Holy Communion, took holy bread and from there on-wards whoever could fast for the entire 40 days did so. On the first three days they wouldn't eat or drink anything, not even water.

During the 40 day fast, coffee houses remained open and many attended however nobody danced. Every Friday they attended church service. As the week of Easter arrived they cleaned their houses and yards and the entire village. On the last Saturday before Easter (named Saint Lazarus) they made Kerkele otherwise known as koulouria (biscuits made from sweet bread) and on the following day, Palm Sunday. they would give them to children along with white eggs while they sang psalms.

During Holy Week there would be no work and they attended every day. On Easter Thursday they baked bread and made tsourekia (sweet bread) and painted the eggs red. At nights they would attend church for Gospel service (Dodeka Evangelia). They took 12 objects with them to church so that they would be blessed for good luck throughout the year. On Good Friday, they attended church and passed under the Epitaph, performed Holy Communion and then at 3 am they ate soup. On Easter Saturday whoever didn't make their tsourekia would do so. They sacrificed a lamb, chickens and roosters and began preparing for Easter day. The parents also bought presents for the children.

On the night of Easter, they stayed up all night. After 2 am and at the first sound of the roosters crowing the church bell would ring. The entire village would then make it's way to church. After 4 am there would be a liturgy. Some stayed till the end while others went home earlier. They would say Christos Anesti (Christ has risen) and then partook in the custom of tsougrisma; the breaking of red eggs. In small groups of 3 or 4, the older folk would visit each house in the village and along with the Pontic lyra would sing, dance, break eggs, and offer the householders ouzo. The second part of Easter was at midday. Again people would attend church. After church service all the village folk would gather in the village square or in a school yard and someone would play the gayda (bagpipe) and everyone would dance to celebrate the end of fasting. The children would play games by rolling their red eggs along the ground. Whoever had the strongest egg would take the other's eggs.