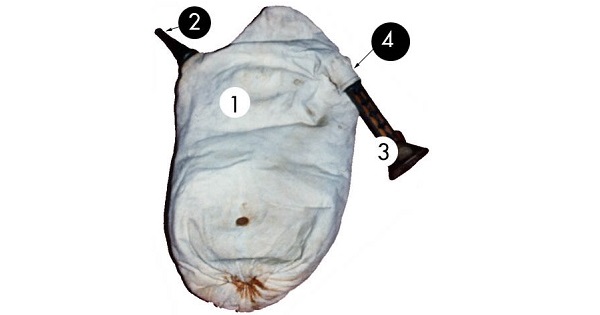 The Angeion is made from sheep or goat's leather by a qualified person. The entire hide of an animal is inverted to produce the air chamber (1). The mouthpiece (2) or blow pipe is a cylindrical tube which is attached to the leather air chamber. The player blows into the mouthpiece in short intervals, then plays on the chanter's flutes (3) while waiting for the loss of air. The chanter consists of two reeds which sit in two flues. Each flute has five holes; so there are two sets of 5 holes.

The Angeion was played in virtually all regions of Pontus and is still played there today. It was played on its own (solo) due to the constant and loud sound it produced.