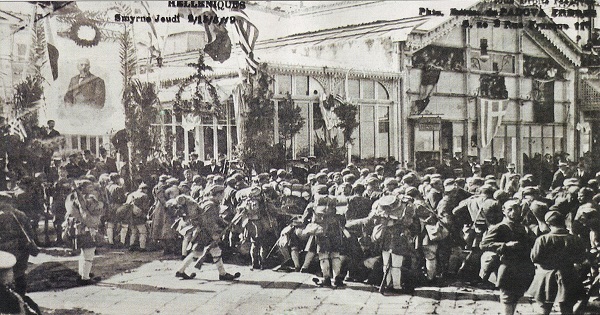 Native Greeks of Smyrna welcome the Hellenic forces to the city on the 15th of May 1919.

When speaking of the Greek Genocide a minority view among people including some in the Greek community appears to be a sense of ambiguity regarding the Hellenic military presence in western Asia Minor from 1919-1922. As a result, these groups either deny or question whether Greeks in these regions were victims of genocide. Due to this skepticism, some Greek community leaders exclude large numbers of Ottoman Greek communities from genocide recognition at municipal and parliamentary level leading to a long-term distorted view of the genocidal experience of these Greeks. Below are a few of the more commonly used arguments used by some people to discredit the Greek Genocide as a result of the Hellenic military presence.

Firstly, it should be noted that in 2007 the International Association of Genocide Scholars (IAGS) an organization of the world’s foremost experts on genocide voted overwhelmingly to recognize the genocide of Greeks living in the former Ottoman Empire from 1914-1923. The recognition encompassed Greeks living in regions throughout Asia Minor (the Asiatic portion of modern-day Turkey), not just the region of Pontus. The Hellenic military presence was taken into account. The Greek Genocide therefore has been affirmed by experts and cannot be questioned.

Occupation or invasion?
One of the things people are distracted by is whether the Hellenic military presence was an invasion or an occupation. In order to clarify this it's worth considering that after WW1, the victorious Allies and the defeated Ottoman Empire signed the Mudros Armistice to end hostilities in the eastern theater of war. Subject to Article 7 of the Armistice agreement the victorious Allies were given the right to occupy any strategic points within the Ottoman Empire which threatened their security. At the Paris Peace Conference, Greece was issued a mandate to occupy Smyrna by the western powers; ie. Great Britain, France and the U.S while Italy was given the right to occupy south-western Asia Minor and France occupied the south-eastern regions. As such Greece was officially occupying Smyrna, not invading it.

It's also worth noting that Hellenic forces were given a mandate to occupy Smyrna partly due to the treatment of Greeks in the five years prior to the Allied mandate. A few days prior to the arrival of Hellenic troops in Smyrna, the British Secretary of State for Foreign Affairs stated: “With a view to avoiding disorders and massacres of Christians in Smyrna and its environs, the occupation of the town and forts by Allied Forces has been decided upon by President [Wilson], Prime Minister [Lloyd George] and M. Clemenceau.” The occupation of Smyrna by Hellenic forces thus started out as a peace-keeping mission to prevent further atrocities of non-Turkish civilians. This detail is often overlooked.

Alleged Atrocities.
Some people claim that acts of sporadic and often alleged atrocities committed by a military force should be considered when talking about the Greek Genocide. To clarify, the Greek Genocide is not connected to any form of war activity and involved the destruction of unarmed Greek civilians including men, women and children during times of peace and also outside zones of war. From May 1919 to September 1922, Hellenic forces maintained a military presence in certain areas of western Asia Minor. The Greek Genocide involved the destruction of Greek communities outside these areas of occupation. It's pertinent to add that in his memoirs, Winston Churchill stated that Greek atrocities were "on a minor scale." Professor Rudolph Rummell from the University of Hawaii states that the Hellenic occupation resulted in the death of 15,000 Turks. If we compare this to the death of approximately 1,000,000 Greeks during the Greek Genocide the number pales into insignificance.

An Alibi Exists in Western Asia Minor.
Some are also of the view that the persecution of Greeks from certain regions within Asia Minor should be excluded from the Greek Genocide equation because according to them an alibi exists for their slaughter while in Pontus there was no alibi. These people should consider that in the Pontus region, there was a Russian military occupation, a British military presence, a Hellenic naval bombardment and a sporadic armed resistance movement among other things. If a military presence and the formation of armed units determines whether genocide occurred or not, calls for genocide recognition for the Pontus region would be met with intense scrutiny.

Lausanne Treaty
Some also feel uneasy about an Article within the Lausanne Treaty that mentions Greece's obligation to make reparation for its conduct during the Greco-Turkish War. It should be stressed that by the time the Lausanne Treaty was signed in July 1923, the genocide had been completed. The signing of the Treaty therefore did not and does not in any way absolve Turkey of the persecution of its native Greek subjects or any other subjects for that matter which occurred prior to its signing . The signing of the Lausanne Treaty was an attempt to normalize relations between Turkey and the other signatories namely Italy, France, Japan, Rumania, Greece and others. The reparations in question refer to war crimes that were committed by undisciplined members of the military and cannot be included or compared to the planned systematic extermination of Ottoman Greeks during the Greek Genocide.

Genocide of Turks?
Some Greek community leaders only seek recognition for the genocide of the Greeks of Pontus and exclude Greeks from other regions of Asia Minor from recognition because they somehow fear that Greece may be accused of genocide against the Turkish population during its occupation. In order to answer this, one needs to examine the events very carefully. Were acts of violence against Turks during this period a result of the Hellenic military or were they acts of retribution by native non-Turkish communities who had suffered in the years prior? And were these acts pre-planned? The Hellenic Army was sent to Asia Minor as a peace-keeping mission and immediately upon its arrival was subjected to attacks by armed irregulars who often hid in Turkish communities to prevent their arrest. The operation to disarm and arrest these irregulars was complex and sometimes involved civilian death.

What's worth noting is that the Hellenic Army was accused of alleged atrocities in the Yalova, Gemlik and Izmit Pensinsular in 1921, however upon investigation the perpetrators of these alleged crimes against Turks were mostly native Greeks and Armenians who sought retribution for the persecution they had endured in the years prior. Genocide by definition is a carefully planned and systematic crime. Retributive atrocities that Greeks and Armenians were accused of were in no way systematic or pre-planned. Instead, they were acts of instinctive vengeance. There is no evidence to suggest the Hellenic Army - or Greeks and other civilians for that matter - planned acts of violence against the Turkish population.

The Greek Genocide occurred over a 9 year period (1914-1923) during which indigenous Greek communities living in Ottoman Turkey were subjected to a range of persecutory measures implemented to bring about their physical destruction. By the time the Hellenic military arrived in Asia Minor large numbers of Greeks throughout Asia Minor and also Eastern Thrace had perished due to acts of genocide. Ignoring this period before the Hellenic occupation erases almost six years of persecution of Greek communities at a time of no foreign military presence. It's important that efforts to obtain recognition for Greek victims by Greek community groups are based on historical evidence and not on personal fears. By ignoring the advice of reputable historians Greek community groups are not only denying recognition and closure for descendants of large numbers of Greek Genocide victims, but they are also distorting the historiography of the Greek Genocide altogether.

Read the article in Greek