The following report from The Belfast News Letter dated Thursday 16 May 1922, gives a full perspective on the whole story of the Turkish leadership that destroyed the Christian minorities (Greeks, Armenians and Assyrians) of the former Ottoman Empire. This is just of the hundreds of news reports you will find in Before the Silence: Archived News Reports of the Christian Holocaust that Begs to be Remembered  by Sophia Kontogeorge-Kostos.

MORE TURKISH ATROCITIES
The telegram which MR. CHAMBERLAIN read
in the House of Commons yesterday prove that
the unspeakable Turk is also unchangeable.
All attempts to civilize him have failed, and he
is incapable of forming or maintaining a just
and honest administration. When the Young
Turkish movement was in progress many people
were confident that a new era was opening for
Turkey, but subsequent events disappointed
them, The Young Turks soon showed that they
were no better than the Old Turks. Like them,
they were guilty of horrible atrocities against
the Christians of Armenia, and for several
years massacre has followed massacre until that
persecuted and martyred race is in danger of
complete extermination. That seems to be the
deliberate object of the Kemalists whose seat of
Government is at Angora. MR. T. P. O'CONNOR
asked the information in regard to the reported
murder of 10,000 Greeks in Asia Minor, and the
seizure of their wives and children for transfer
to Turkish harems; whether the Government had
made any representations to the Kemalist
authorities or those at Constantinople; and
whether they had been warned of the effect
which the massacres would have on the decision
of the Powers in regard to the relations between
Turkey and Greece, and the demand of the
Kemalists that Smyrna should be evacuated by
Greek troops. Mr. Chamberlain read telegrams
from his Majesty's High Commissioner as Con-
stantinople which confirm the reports of
systematic and organised atrocities. The Turks,
he states, appear to be working on a deliberate
plan to get rid of minorities, and he describes
how the Christians have been deported from
their homes, and forced to make long marches
in the course of which many thousands of them
have died from hardship and exposure. This
method is adopted so that the Turks can say
that they did not actually kill them. They
generally choose winter weather for this cruel
form of massacre, but now fresh deportations
are starting in all parts of Asia Minor, from the
Northern seaports of the South-Eastern districts,
and a Turkish official at Kharput told DR. WARD, an
American investigator, that in the next massacres
the Turks would take care to do their work
thoroughly. The High Commissioner expresses
the opinion that the Turkish protests now being
received in regard to alleged Greek excesses are
intended to divert attention from their own
atrocities. His second telegram sent on 25th
April states that the whole Greek population of
the age 15 and upwards in the Trebizond area
and its hinterland is being deported apparently
to form labour battalions at Erzeroum, Kara and
elsewhere. The deportations, he sates, are carried
out in conditions of terrible hardship. The Turks
have been repeatedly warned against continuing
these atrocities, but without effect. The Govern-
ment is inviting the French, Italian, and Ameri-
can Governments to join in a through and im-
partial investigation of what the Foreign Secre-
tary in his telegram to the High Commissioner
described as "the appalling tale of barbarity and
cruelty now being practiced by the Angora Turks
as part of a systematic policy of extermination
Christian minorities in Asia Minor." As the
Angora Turks assert either that the massacres did
not take place or that the reports of them have
been greatly exaggerated, they should welcome an
impartial investigation, but they may be expected
to put every obstacle in the way of the investi-
gators. The dispatch from Lord Curzon contains
the following significant sentence:-"It is in-
conceivable that Europe should agree to hand
back to Turkish rule, without the most stringent
guarantees, communities which would be liable to
be treated in the manner described by competent
American witnesses, whose reports, moreover, are
confirmed by independent information in our
possession." This is the least that the Govern-
ment can do, seeing that it has accepted respon-
sibility for the protection of the Armenian Chris-
tians. But we fear that "the most stringent
guarantees" are useless in the case of the Turks.
No guarantees can bind them. The only thing to
be done is to deprive them of power as far as pos-
sbile. It would be a crime against humanity to
extend their rule in any direction, and it is to be
hoped that on such a question as the Govern-
ments of France, Italy, and the Untied States
will be in complete agreement with our Govern-
ment.

©  COMMENTS: This report reveals that regardless of their geographic locations in Asia Minor, the Christians were doomed for total extermination: First by Sultan, Abdul Hamid; Second by the Young Turks; Finally, by the Kemalists. (SKK).

Source:  Before the Silence: Archived News Reports of the Christian Holocaust that Begs to be Remembered 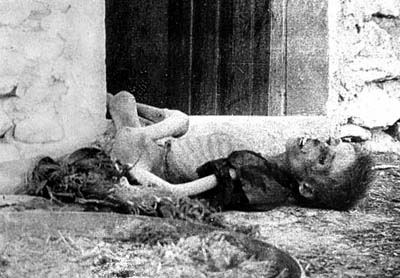