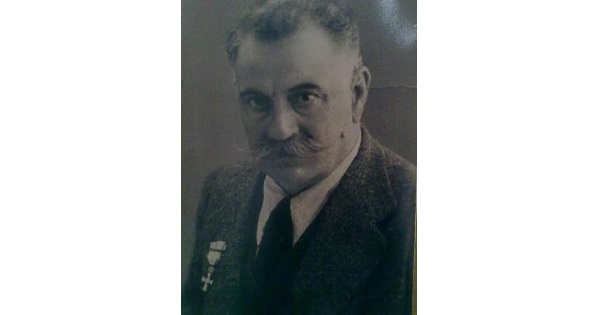 Giorgos Kandilaptis-Kanis was born in Argyroupoli (Tr: Gümüşhane) in the Pontus region of Turkey in 1881. He graduated from the Argyroupolis Tuition Center in 1899-1900 and became a teacher of the municipality. He taught in schools of the region while at the same time offered his services in various positions including that of Member of Delegates for exams, Secretary of the Diocese of Chaldia, organiser and director of cultural organisations, and he was also a representative of his fellow countrymen during the period of the Exchange of Populations.

From the time he graduated as a teacher in 1899, he began writing the history of his region and collected valuable information about it's folklore and popular poetry. He studied the monasteries and fortresses of Chaldia, and rewrote many secret codes. He published the books Ξυνωρίς και Εαρινόν Ρόδον (Trebizond 1911, 1913) as well as many articles in the newspapers Φάρος της Ανατολής (Lighthouse of Anatolia) of Trebizond, and Αργωναύτης (Argonaut) of Batumi.

During the Exchange he managed to save and transport to Greece many historical and folkloric heirlooms from the Holy Monasteries and the Diocese of Chaldia, the remains of the The Great Emperor of Trapezus, Alexius, and the eminent library of Argyroupolis ‘Kyriakidis'.

In Greece he taught for the municipality of Imvros until his retirement. Among his other accomplishments he was was decorated twice by the Greek state, as well as winning other distinctions and honors. He continued writing books of which 10 were published, as well as many monographs, and articles for journals and newspapers. He died in 1971 and was buried in Alexandroupoli.