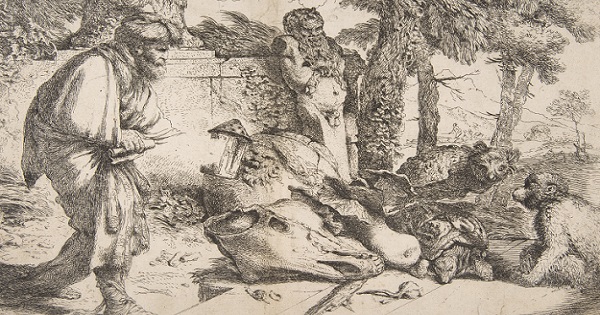 Diogenes 'the cynic' of Sinope was a philosopher and as his name suggests, was born in Sinope, Pontus (current day Turkey) in 412 BC although some sources have his birth at 399BC. According to Diogenes Laertius, he died on the same day as Alexander the Great in 323BC, most probably in Corinth at about 90 years of age.

His father Icesias, a banker, was imprisoned or exiled on the charge of adulterating the coinage. Diogenes was included in the charge however escaped and went to Athens. Here he became a pupil of Antisthenes who was the head of the cynics, but it was not long before Diogenes surpassed his master in terms of reputation.  Both Antisthenes and Diogenes are called the founders of the school that's known as Cynicism.

Diogenes' philosophy was based on a simple life free of luxuries and ambitions. He often ridiculed the wealthy and those who lived civilised lives. He adopted his principles by living out in the open (in a tub), wearing nothing more than a cloak and surviving on a diet consisting mostly of onions. He used to stroll around town in broad daylight holding a lantern and saying.."I am looking for an honest man".

On his meeting with Alexander the Great, Diogenes is believed to have been rummaging through a pile of bones, and turned to Alexander and said.. "I am searching for the bones of your father, but cannot distinguish them from the bones of a slave".

Other famous quotes by Diogenes

- The art of being a slave is to rule one's master.
- Discourse on virtue and they pass by in droves, whistle and dance the shimmy, and you've got an audience.
- In a rich man's house there is no place to spit but his face.
- Why not whip the teacher when the pupil misbehaves?
- Of what use is a philosopher who doesn't hurt anybody's feelings?