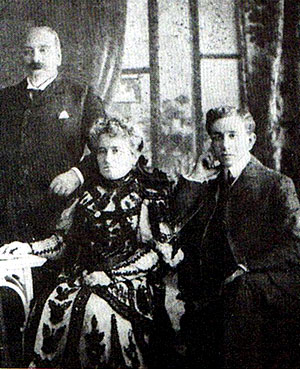 Konstantinos Theofylaktos with his wife Eleni and their son Adam.

Born in Trapezunta (Trebizond, today Trabzon) Konstantinos Theofylaktos owned and operated one of the four biggest banking and merchant houses in Trabzon and Pontus as a whole. He was a benefactor of the Trabzon community and mayor of the city during the Russian occupation (1916-1918). In January 1883 the Trabzon Tuition Center was formally opened following an official ceremony. On the 16th of February 1883, he and Phokianos Kousis were both mentioned as financial donors to the inauguration of the Center in the Patriarchate's Newspaper, ‘Εκκλησιαστική Αλήθεια' (Ecclesiastical Truth).

The House of Theofylaktos along with three others, dominated the economy of Pontus from Sinope to as far as Batumi and Erzerum. The Turks feared the economic strength of the Greek merchants and bankers while at the same time they respected them. According to the Metropolitan of Trebizond, Chrysanthos, local Turkish businessmen ignored the local boycott which was imposed on Pontic Greek businesses in 1914 by the Young Turks, for fear of reprisals from the local banking and merchant houses.

A portrait of Theofylaktos was hung in a prominent position on the walls of the palace of the Diocese of Trebizond alongside others who donated money. With his own funds, a kindergarten was built and operated in the parish of Saint Gregory, and was named after him. During the Russian occupation of Trabzon, the Diocese of Trebizond considered the formation of an autonomous state, co-inhabited by Greeks and Muslims. They recommended an autonomous municipality in Trabzon and the first Greek mayor to be Konstantinos Theofylaktos. It was to be made up of Greeks and Muslims, and to comprise courts that would judge according to the customs of the municipality with a local garrison.

In 1907 Theofylaktos, along with G.Fostiropoulos, contributed funds towards a four-year course at the universities of Lausanne and Liepzig for the then Deacon and later Metropolitan of Trabzon Chrysanthos.