The Origin of Current Greek and Turkish Surnames 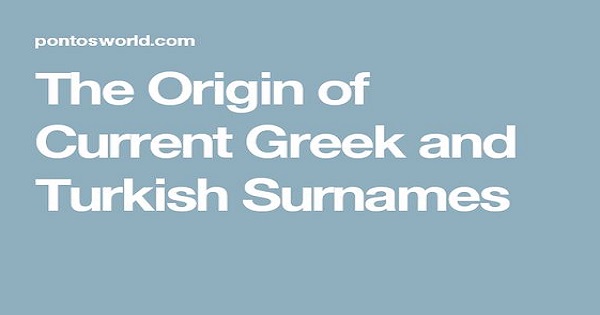 It appears that the Chinese were the first to acquire more than one name with the use of surnames.  The exact date when surnames began is shrouded in legend but they clearly occurred well over 2,000 years ago.  In the western world, the inherited family name is a comparatively recent development. Some ancient Greek families identified themselves by an ancestor’s name but the Romans appear to be the first Europeans to make regular use of family names. However, this custom died out with the collapse of the Roman empire (Catsakis 2003).

Surnames in the modern sense were used among Byzantine and Venetian nobility about the 9th century.  By the 14th century the custom was widely practiced in Britain and France.  By the 16th century it was well established in Germany and Poland.  In Scandinavia, in the late 19th century, the government began requiring the usage of hereditary family names.

Although hereditary family names were prevalent in Greece quite early, they were not firmly fixed. This flexibility of surnames was common, especially in villages until the third decade of the 19th century when Greece won her independence from the Ottoman empire.  Surnames then became more fixed.  Nevertheless the adoption of new surnames occasionally still occurred up to the early 20th century (Catsakis 2003).

However, the adoption of fixed surnames in Turkey didn’t commence till 1935 (Aksu 2006).

According to Catsakis (2003), the Greek tradition in naming a child’s first name is:

A son is never named after his father’s first name unless the father has died before the child is named.  A daughter is never given her mother’s first name unless the mother dies while giving birth.  The Greek custom of naming children after their grandparents quickly produced many individuals in the same community with the same name.  (See Note 1.)

Catsakis (2003) states that Greek surnames were created like surnames from most cultures, especially in the western world and they fall into the following five main categories:

From the father’s name (patronymic)

This category is the most common among Greeks.  Such names are derived by adding ‘son of’ to the end of the father’s first name.  The suffix used varies according to the place of origin.  Endings with ‘akis’ are common from Crete, ‘atos’ is common from the island of Kefalonia, ‘poulos’ is common from the Peloponnesus, e.g. Nikolopoulos.  Greeks from Anatolia and eastern Thrace often have endings with ‘idis’, ‘adis’ as well as the Turkish ‘oglou’.  [Many Pontic Greeks from the Black Sea region of Anatolia have surnames ending with idis, e.g. Jasonidis.]

From the father’s name (patronymic)

Many surnames reflect some personal or physical characteristic of the original bearer, e.g. Kontos (short) forming Kontogiannis (short John); Xanthos (blonde/fair haired) forming Xanthogiannis (fair haired John).  In some cases these nickname surnames refer to some event in the life of the individual which may be difficult to determine, e.g. Mavros (black) as in Mavrogiannis (black John).  Did it refer to his black beard or dark complexion or that he often wore black clothing?

From occupations or titles

Occupations are a rich source for surnames, e.g. Raftis (tailor), Papoutsis (shoemaker).  Surnames beginning with Papa (priest) are very numerous in Greece, like Papadopoulos (son of a priest) which is very common from the Peloponnesus (see Note 2).

Interestingly, the most common occupational name in many countries, equating to ‘smith’ is seldom used in Greece since metal work there was traditionally a gypsy trade.

Titles are also seen as prefixes.  ‘Hatzi’, from the Arabic ‘Hajj’ (one who has visited Mecca) at the beginning of a Greek surname, e.g. Hatzigiannis, is a title for someone who made a pilgrimage to the Holy Land and had been baptised in the river Jordan.  The title ‘Mastro’ indicates a master craftsman, e.g. Mastrodimitros.

Some Greek surnames are derived from Turkish words or other languages which have had ties with Greece.  This does not signify foreign ancestry.  ‘Kara’ is the Turkish word for black as in Karageorgos (black George).  My own surname, Topalidis, has been derived from one of the following Turkish words:

The surname Katsakis (as in the author Lica Catsakis) is not a patronym from Crete, but is actually derived from the Turkish word ‘kachak’ which means fugitive or escapee (see Note 3).

Overall, localities are a minor source for Greek surnames.  If a male moved to another place his surname may have been replaced based on the place of his origin, e.g. Kypros (from Cyprus), Arvanitis (from Albania) and Vlahos (referring to the Vlach people a minority group originally from the Pindos Mountains who were traditionally shepherds).

The Ottoman Turks were not in the habit of using surnames.  A man could be known by his personal name given at birth, supplemented by a second name given in childhood, or by his father’s name.  The more complex and extensive relationships of a modern society made a system of surnames desirable; the adoption of a new civil code in Turkey made it necessary (Lewis 2002).

The Surname Law in Turkey which became effective in January 1935, forced Turkish citizens to find and register surnames by 2 July 1936 which had to be drawn from the Turkish language.  This law also allowed Turkish families with an existing surname to alter and register it.  Turkish families with no recorded surname along with those who wanted to change their old one searched newspapers for name lists.  For some, their new surname was linked to the heroes and virtues valued on the central Asian steppes.  Surnames belonging to military rank, civil officials, tribes or foreign nations and morally unsuitable names were forbidden.  People were discouraged from using foreign suffixes like ‘yan’, ‘of’, ‘viç’, iç’, ‘is’, ‘dis’, ‘pulos’, ‘aki’, ‘zade’, ‘bin’.  These endings needed to be replaced with the Turkish ‘oglu’ (Türköz 2004).

Members of the Jewish, Greek and Armenian minorities were not bound by this law.  However, many who were concerned about drawing attention as being part of the non-muslim minority changed their name by truncation or translation (Türköz 2004).  In 1934, the Greek, Jewish and Armenian minority communities were already recorded by their family names (Aksu, 2006).  In accordance with the Lausanne Treaty, nearly all the christian Greeks still living within the borders of Turkey were exiled by the end of 1924 to Greece.  The exception was Greeks living in Istanbul and on the islands of Imbros and Tenedos (see Note 4).

Aksu (2006) identified that prior to 1935 on official Turkish documents such as census returns, military records and title deeds, people were identified by who they were the son/daughter of and where they were registered at birth, e.g. Tahir Oğlu Selim, Gönen (Selim, son of Tahir from Gönen).  Official records could also include their occupation, their father’s occupation, their military rank, their nickname, their father’s nickname, or their family’s lakap (names applied to all members of extended families over generations and were in many ways, the precursors of surnames).  Lakaps carried more weight than a nickname, like Ali, from the Dal family.

For women, it was much the same, Ahmet kizi Rahşan (Rahşan, daughter of Ahmet).  The Ottoman naming system eventually created an excessive number of people bearing the same name (Aksu, 2006).

Using the Turkish General Directorate of Population and Citizenship (2013) list of the most common Turkish surnames (available at: www.nvi.gov.tr/Files/File/Istatistikler/Isimler/en%20%C3%A7ok%20kullan%C4%B1lan%20soyad.pdf) I was able to translate into English 29 of the top 30 surnames.  Because of the recent forced genesis of Turkish surnames it seems inappropriate to categorise these surnames, which were based on idealised virtues or values, into the same five categories as specified above for Greek surnames.  The 15 most common Turkish surnames and their English translation are:

These surnames are very different from Greek surnames, whose largest surname category was patronymic.  In comparison to some other European countries like Germany, occupational surnames with Müller (miller) (1), Schneider (tailor) (3) and Fischer (fisherman) (4) are most common.  In France, with Martin (1), Bernard (2) and Thomas (3), patronymic surnames are most common.  In England, the most common surname is ‘smith’, an occupational surname; but six out of the top 10 surnames, i.e. Jones (2), Williams (4), Harris (7), Wilson (8), Johnson (9) and Martin (10) are patronymic (Rončevič 2004).

Andreadis (1995) explains that when the Greek crypto-christians south of Trabzon in Anatolia revealed themselves as christians after the sultan’s Hatt-i-hümayun (which granted religious freedom in the Ottoman empire) in the mid-19th century, that their Turkish names and many of the christian Greek names were changed into ancient Greek surnames.  This resulted in the creation of new archaic names in Pontos, which ended in ‘ides’ or ‘ades’ [and most probably ‘idis’] and rarely in ‘opoulos’.  When the translation was not convenient, the Greek suffix ‘ides’ was added to the Turkish name, e.g. Muhtarides.

Note 3: My maternal grandfather’s nickname after he left Pontos in 1918 was ‘kachak’.

Note 4: A Turkish law had been passed in 1932 that gave non-Turkish citizens up to a year to leave jobs designated only for Turkish citizens.  This law targeted the christian Greek population of Istanbul [who held Greek passports] as well as groups with refugee status.  As a result many Istanbul Greeks migrated to Greece (Türköz 2004).

I warmly thank Lica Catsakis and Ibrahim Aksu for their past discussions on the derivation of surnames and for providing me with their publications.  Publications by Lica Catsakis can be attained from: www.greekgenealogy.org/

Andreadis, G 1995, The Cryptochristians: klostoi: those who returned, tenesur: those who have changed, Kyriakidis Brothers, Thessaloniki, Greece.