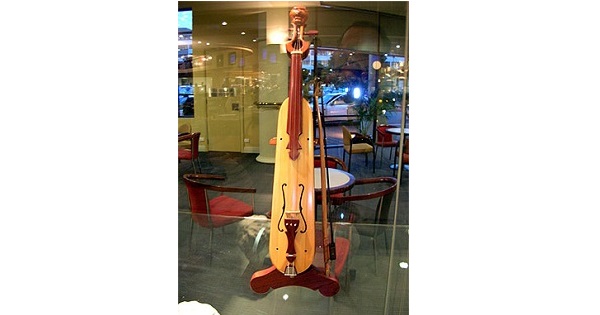 Where music is considered a frill, where no effort in made to transmit a musical heritage to new generations, where it is not cultivated, music and man have been robbed of value and meaning.1

The bottle-shaped kemençe, pronounced kemenche (see Plate 1), is the beloved instrument of Pontic people from north-eastern Asia Minor bordering the Black Sea. It has strong symbolic value for Pontic Greeks and serves as a symbol of cultural identity.2 The word kemenche is Persian in origin meaning ‘little bow'. It is sometimes called the karadeniz kemenchesi (Turkish for Black Sea fiddle) and the Pondiaki lyra (Greek for Pontic lyra).3

The body of the kemenche* is carved from cherry, plum, mulberry, walnut or juniper wood with seasoned plum heart-wood regarded the best.4  It is carved in the shape of a trough with rounded ends and covered with a coniferous wood sound-table. The short neck, which may have a fingerboard, tapers to a pear-shaped pegbox. Three strings are played with a short horsehair bow. The strings are tuned in 4ths and played in two-part polyphony (bowing across two strings at once).3  Until around 1920, some, or all of the three strings were made of silk. However, silk strings produce a beautiful but weak sound. Silk made way for gut strings and subsequently replaced by metal strings.5

Two classes of kemenche differing in size have been distinguished, but local Black Sea Turks, did not differentiate them. The smaller ones, around 54 cm in length, often have a fingerboard and the larger instruments are around 68 cm in length. Also, the kemane of Cappadocia, is a type of ‘large kemenche', which, as seen in Turkish Museums, have six strings with a further six sympathetic strings under the fingerboards.4

In contrast, according to the Greek kemane player, George Poulantzaklis, the kemane is between 55 cm and 70 cm in length and only larger in volume and shape than the kemenche. The instruments Poulantzaklis uses have four strings with four other strings (sympathetica) which create a vibration (clamour) to the first four.6

The kemenche is one of the four basic types of lyra. The other three, the Cretan lyra (see Plate 2), the lyra of the Dodekanisa and the Thrakian lyra, are pear-shaped with three or four metal or gut strings which are stopped from the side by the fingernails (which differs from the kemenche where strings are stopped by the finger tips).7  Small pellet-bells attached on the bow (which provide rhythmic accompaniment), on the pear-shaped lyra, were once common (until around World War II), but are now rare3 (see Plate 3). 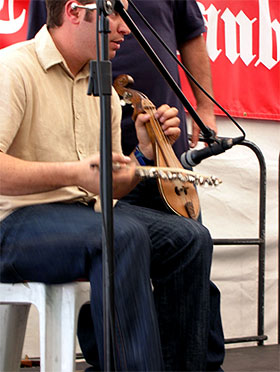 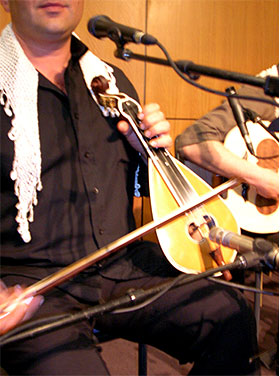 The origin and history of the kemenche are obscure. The earliest known representation of a kemenche appears to be in an album of watercolours of Istanbul painted by Amadeo Preziosi. Preziosi was active in Istanbul from about 1840 onwards and was the chief figure in the Turkish art world in the 1870s. It is important to remember that the lack of images of humans and human artefacts in Islamic countries hinders the dating of the kemenche to an earlier period.4

The sound of the kemenche is sharp and instantly recognisable. It is played in three positions:

• While sitting, with the bottom end resting on the knee (although occasionally the fiddler will raise the fiddle above the knee, to obtain maximum resonance).

• While standing still, with the fiddle hanging vertically; or

In the past, kemenche players placed their wrist through a loop made of a ribbon, which was tied to the fiddle's head. This helped them stabilise the instrument when they played the notes of the upper register with the extension of the fourth finger.2

The string tuned to the highest pitch (on the observers right when viewed in front) is known by Turks as the zil (I) string and is tuned first. The sağir (II) is the middle string and bom (III) the lowest string. Turkish fiddlers choose a pitch at which their instrument, often made by themselves or a local carpenter, is most resonant.4

From a Greek perspective, the strings of the kemenche are:
tuned on re, la, re, but their pitch is not absolute. The melody is played on the first or the second string, either while pressing down its adjacent string so as to form two parallel melodic lines, or touching with the bow the other string as a drone. Kementse is mainly played solo or accompanying the singer. Nevertheless, when the dance takes place in the open air it may be accompanied by a second kementse or a daouli10 [drum].

Playing techniques of the kemenche in Greece have been described.
The strings of the lyra are stopped with the player's fingertips ... using the four fingers of the left hand give expressiveness to the colourful playing of the lyra. In order to produce pitches higher than those of an open string, the string is firmly pressed against the fingerboard with the fingers of the left hand, thus shortening the sounding length, and consequently raising the pitch. The string itself vibrates only between the bridge and the nut. ... When the lyra player plays a melody, he often simultaneously stops a neighbouring string with the same fingers. Something similar takes place in the case of the bow. In the course of playing, the bow will often be used to vibrate two strings, the string upon which the melody is played and the neighbouring string.11

In relation to the left hand playing technique:
The most important characteristic left-hand technique in Pontic lyra playing is the trill. The movement of one finger produces a note that alternates repeatedly with a sustained tone held by another finger.12

‘The left hand playing technique is also very important in order to evaluate a musical performance, but it is the bowing [right hand playing] that forms the overall acoustic result.'13

The bow is held firmly, yet lightly, between the fingers and thumb of the right hand. The third finger is in a position to exert varying pressure on the bow hair. ... The bow is drawn at right angles across the strings ... The correct bow position on the instrument (about 2 to 4cm away from the bridge) makes a clear and pure sound. ... In performance, the performer may need to turn the body of the instrument with his left hand in order for the bow to touch another string.14

Defining a specific melody in Pontic lyra music is very elusive. There is no authoritative or written version of a melody or tune and each time it is performed by the lyra player, it is played differently. ... The use of modulation in Pontic lyra music is common. The lyra player usually modulates by playing a melodic phrase in a different key tonality above or below that of the original tonal centre. In contemporary music repertory, most of the time modulation takes place through improvisation. Thus, the Pontic lyra player may modulate by improvising and changing the mode of the original piece but must always return to the tonic of the original tune.15

It appears that Samsun on the Black Sea coast is the western limit of the playing of the kemenche.4 Playing the kemenche continued eastwards, beyond Trabzon (300 km straight-line distance east of Samsun) and Hopa to the Soviet frontier (160 km east of Trabzon). Reinhardt regards the neighbourhood of Machka (25 km south of Trabzon) as having players with the highest technical skill, including the highest frequency of bowing.16

In Findikli (130 km east of Trabzon):
the average speed [of playing] falls, and extended use of undecorated fourth parallels becomes more frequent. In villages south of Pazar [100 km east of Trabzon], the simultaneous bowing of all three strings may be used extensively. ... In the opposite direction, West of Ordu [140 km east of Samsun], the style tends to become more linear, with only occasional use of two voices, and there is perhaps more frequent use of tetrachords that include an augmented second.17

Davis notes a break in the characteristic flora between Giresun and Ordu (115 km and 160 km west of Trabzon respectively). This may be correlated with a sharp break in the character of the coastal scenery east of Ordu, where forested hills run down to the sea, and are transected by steep valleys which become more broken than the rolling country to the west. From this break to the Georgian border, there is a distinctive region, extending inland up to the watershed that separates it from the central plateau. This region is floristically linked with Western Georgia and the Caucasus. The same region coincides very closely with the distribution of the kemenche. The fiddle extends into both the Caucasus and Soviet Armenia.4

It may be significant that the kemenche appears to be linked with the hazelnut cultivating population of the eastern coastal region.4

3 The New Grove Dictionary of Musical Instruments, In three volumes. 1985.

# In the future, I look forward to reading information that is more contemporary from accomplished kemenche player, Nikos Michailidis, who is researching for his PhD thesis.