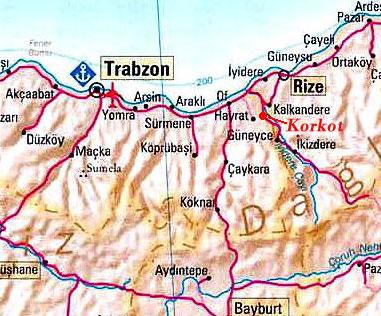 Korkotas (Gr: Ο Κορκοτάς, Tr: Korkot) was a village in the Chaldia region which before the Exchange of Populations of 1923, comprised approximately 60 families. According to George Kandilaptis the first settler in the village during the Comnenos Dynasty was Ioannis Kourkouas. He built the first temple in the village which was named Hagios Ioannis Chrysotomos.  The village saw an influx of residents from Zermoudaswho were fleeing the islamicisations during the period 1828-30. Korkotas was located in a very barren region.

To avoid Turkish persecution, it's residents used to flee to neighbouring Russia in the night time, and under the cover of dark. It had a public school and a church, the Dormition of the Virgin Mary. It also had a number of chapels the most beautiful of which was named  Commander in Chief Michael, and also St John, where on the 29th of August each year a large festival took place. Close to the second chapel existed a spring from which a metallic liquid seemed to weep from.