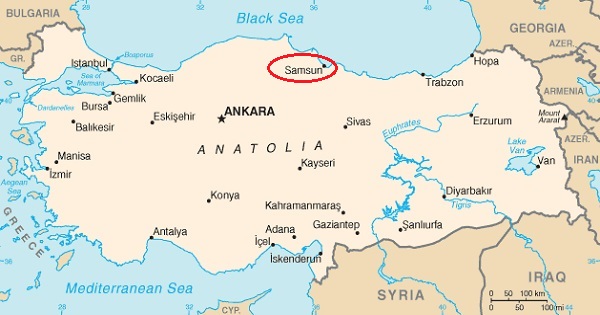 Amisos, otherwise known as Samsunta by Greeks, is today’s Samsun, a city situated on the shoreline of the historic region of Pontus, in today’s Turkey. The name Samsunta is derived from Amisos; Eis Amison (towards Amisos) -> s’Amison -> s’Amson -> Samsunta.  There are also other variants of the name including; Simisso (Genoese), Aminsos (Byzantine) and Misso (Roman). The Turks today call it Samsun.

The city was colonised by the Ionians of Sinope or the Miletians in the 8th century BC. Due to its location it played an important role both politically and economically during the Hellenistic, Roman and Byzantine periods. The city was also one of Mithradates’ major cities.

During its time under Turkish rule and up until the middle of the 19th century it was nothing more than an insignificant town. Things changed dramatically for Amisos after the Crimean War (1856). Many contributed to its growth. The rise in use of steamships and sea navigation in the Euxine contributed to the growth of many cities including Amisos. Later it was the fertility of its land and the geographic location of the town which attracted Greek merchants and tradespeople who brought their trade with them. In this way the Greek community began to flourish and included Greeks from neighbouring Trebizond, Oinoi, Cappadocia, Constantinople as well as other Greeks from Greece itself.

The town reached its trade and economic peak when the population of the region started working exclusively in the cultivation of tobacco. The quality of tobacco in the Amisos region is the best in all of Turkey. Within 30-40 years the Greek population of Amisos not only increased in number but also grew in economic wealth. Amisos was to also attract many Europeans primarily due to its monopoly in tobacco trade.

By 1910, the Greeks, Armenians, or Franks controlled no fewer than 142 of the town’s 156 businesses and 85% of the share of the Bafran tobacco market.1  The once insignificant Anatolian town had now been transformed into a transit destination point for European goods for transport to the Anatolian interior, as well as the point from where local products was exported to Europe. This gives an indication as to how the town grew economically and politically towards the end of the 19th and the beginning of the 20th centuries. 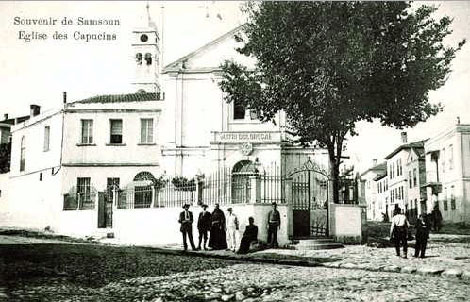 After 1914 the Greek and Armenian populations was to dwindle considerably due to organised death marches and other methods used by Ottoman or Kemalist authorities during the Greek and Armenian Genocides. The Christian populations suffered extreme hardships over a period spanning almost a decade (1914-1923). Of the 20,000 Greeks few managed to survive the genocide. Those who did were sent to Athens, Pireaus, Salonica and other destinations in Greece as part of the Exchange of Populations.

It’s worth noting the Greek community’s achievements in education and communal life up until then.

There were also the following community organisations;

Amisos also published the Greek newspaper Φως (Light) first weekly and later bi-weekly (1912-1914). Today Amisos (called Samsun) is one of the most populated of all the sea side cities on the Black Sea coast of Turkey with a population of 500,000.

See also:
The Greek settlements of Samsunta
Amisos: A history