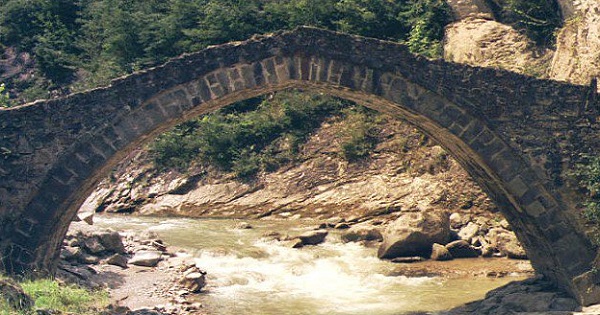 The Pyxites River (Gr: Πυξίτης) is a river that runs through Maçka (Gr: Matsuka). It springs from the mountains of  Zigana, Kulat Dag-Karakapan and Horoz Dag, and empties into the Black Sea east of Trabzon. It is 80km long and takes shape from smaller rivers of Mulaka, Pritani, Panagia Sumela and Galiena. The river is often mentioned in Pontic songs of Maçka and the Trabzon region. It's mentioned in the verse of the legendary folk song Trikhas to Yefiri.

Another name used to describe the Pyxites River is Dafnopotamos (Gr: Δαφνοπόταμος). Dafnunta (Gr: Δαφνούντα), also known as Dafnous or Dafnai, was the name of the eastern commercial harbor and quarter of Trabzon. It's believed it got its name from the abundant laurel trees (Gr: dafnous) in the area.  The Emperor Hadrian (117-138) turned Dafnunta into a harbor, while prior to that it was a bight (bay or gulf). Dafnunta was the home of the Eksartisis (naval station) of the Grand Comnenians. It was also used by the merchant ships of the Genoese and Venetians to anchor their ships. To the Italians it was Dia Funda - de portu sive plazia Trapesonde.

Tiss Trichas to Υefiri is a very well known Pontic story about a bridge located on the ancient Pyxites River. The bridge is on the left side of the main road that goes from Trabzon to Erzerum. It is 18 km from Trabzon near Mikhirtzi-Yesiroglou. Today the bridge is not in use. Some scholars believe the bridge is located on the Sumela river while others have it on the Matsuka river. The tune bears many similarities with the Greek tune Tis Artas to Yefyri (Arta's bridge). In the Pontic version however the master-builder refuses to hand over his father or his mother and agrees to sacrifice his girlfriend because he says he can find another, while in Tis Artas to Gefiri the wife of the master-builder is sacrificed.

References:
The Encyclopaedia of Pontian Hellenism. Malliaris Paedia
The Byzantine Monuments and Topography of the Pontos. A Bryer. D.Winfield.