How Did Greeks From Pontos Identify Themselves? 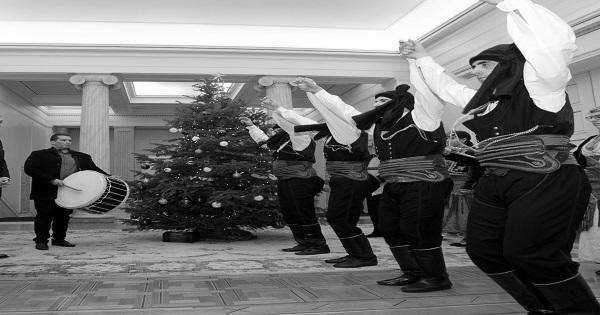 Pontic Greeks performing for members of the Hellenic Parliament during Christmas 2013.

Historical Background
From the 7th century BC, Pontos (northeast corner of Anatolia near the Black Sea) had several Greek settlements (Topalidis 2019).  After a period of Persian influence, it was controlled by the Mithradatic dynasty (302–63 BC).  After Rome defeated Mithradates VI, Pontos was soon absorbed into the Roman empire.

Further west, the Greek colony of Byzantium was established in the 7th century BC on the European side of the Bosporus.  In 324 AD, Constantine became emperor of the Roman empire (east and west) and made Byzantium, renamed Constantinople, his capital.  In 476, the last western Roman emperor in Italy was deposed by a barbarian general who wrote to the imperial authorities at Constantinople that there was no longer any need for an emperor in the west (Sarris 2015, p. 41).

Professor Anthony Kaldellis convincingly argues that the Eastern Roman empire’s ethnic majority and the ruler of Constantinople identified as Roman.  They also had a proper name for their state, Romania (i.e. Romanland).  They comprised and asserted themselves as a distinctive ethnic group with their own language (Note 1), customs, laws, institutions, homeland and sense that they were related by kinship (Note 2).  The historian Prokopios [6th century] described the inhabitants of Pontos as Romans of Pontos (Kaldellis 2019).

In 1204, just before Constantinople fell to the 4th Crusade (Note 3), Alexios Komnenos, the grandson of the Byzantine [Eastern Roman] emperor Andronikos I, left Constantinople for Georgia.  From there, with a contingent provided by his aunt, Queen Thamar, he occupied Trebizond (modern Trabzon) on the Black Sea coast (Miller 1926).  From there, the Komnenian empire of Trebizond became an independent state separate from Constantinople and survived till 1461.

In medieval western Europe, the writing of history labelled people of the Eastern Roman empire as ‘Greeks’ and by the 19th century their standard name became ‘Byzantine’.  In truth, the Greek-speaking population of the empire identified as Roman (Kaldellis 2019). 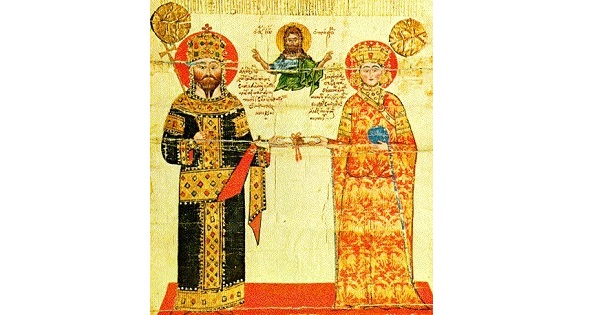 Medieval Period in Pontos
The Komnenoi emperors of Trebizond (1204–1461) were Greek speaking Orthodox Christians (Nicol 1996) and Romans by culture (Kaldellis 2019).  The 14th century Trapezuntine historian, Michael Panaretos, described its people as either Romaioi (which in Greek means Roman) or Christians.  Romaioi then also indicated Orthodox Christians.  ‘Romania’, or derivatives such as ‘Rum’, is how medieval western Europeans, Arabs and Turks identified the state which we call Byzantium (Bryer 1991, pp. 320–21).

In 1461, Trebizond fell to the Ottoman sultan.  Later that year, Trebizond’s last ‘Prime Minister’, George Amiroutzes, wrote to appeal to his fellow Trebizond countryman, Bessarion.  Amiroutzes, a Pontic ‘Roman’, appealed to Bessarion most in his letter (the town, the dynasty they shared and their Christian faith), to their common patris, i.e. one's native town/homeland.  One identifies with a particular village or town only after one leaves the patris.  In the 15th century, ‘Pontic allegiance to patris and clan seems to have been more important than faith or religion’ (Bryer 1991, pp. 320–24). 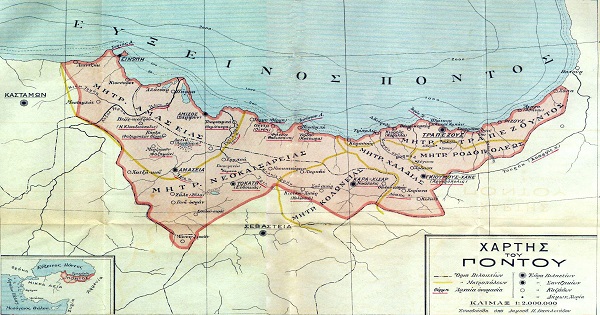 A map of the historic region of Pontos, circa 1919.

19th to Early 20th Century
If we were to fast-forward to the early 19th century, a Pontic Greek (Note 4) Christian male might still describe himself in the ‘old way’ as firstly from a village or town in Pontos and then secondly as a ‘Roman’ (Rum) Orthodox subject of the sultan.  However, by the end of the 19th century, he was calling himself a Greek, influenced by the new kingdom of Greece which brought ‘notions of nation, historical determinism and identity by language’.  This was assisted by their Greek education in Pontos.  After Orthodox Greeks were forced to leave Pontos in 1922–23 (Note 5) and after they arrived in Greece, they were called ‘Pontic’ Greeks, [Pontioi] i.e. they only became Pontic Greeks after they left Pontos (Bryer 1991 p. 327).

Former Soviet Union
From the 18th century, the Greeks began migrating from Pontos, especially to modern Georgia and southern Russia (around the Black Sea).  Most Greeks from the former Soviet Union have Pontic Greek roots <www.pontosworld.com/index.php/history/sam-topalidis/683-the-relocation-of-greeks-from-pontos>.  Those Pontic Greeks who arrived in Greece in the late 1930s from the Caucasus (Soviet Union) were called Rosoprosfiyes (Russian refugees) by Greek citizens.  The term Pontioi has been used by the Greek State to group together all those whose ancestry originated in Pontos (Hionidou 2012, p. 108).

In the mid-1990s, most Greeks with ancestry in Pontos from the former Soviet Union continued to define themselves in the old way as Romaioi (Romans) or preferred to use the Russian term Greki (Greeks) for their ethnicity [belonging to a social group that has a common cultural tradition] (Note 6).  Ten years later, almost all of Dr Anton Popov’s informants in southern Russia preferred to consider themselves as Pontic Greeks.  This change in their identity coincided with the mass migration by former Soviet Greeks to Greece and to the Republic of Cyprus, where their ‘Ponticness’ was cited to describe how they were culturally different from Greek citizens born in Greece or Cyprus (Popov 2016, p. 146).

The issue of identify of Greeks with ancestry in Pontos who came to Greece via the former Soviet Union is complex. The immigrants had a strong national Greek identity, (as prescribed by the Soviet State) but this was challenged by their new host population in Greece—though not by the Greek state (Note 7) (Hionidou 2012, p. 118).

Conclusion
From the beginning of the Eastern Roman empire (which included Pontos), its inhabitants called themselves Romaioi (Roman).  In the 15th century (after the fall of the empire of Trebizond) to the Ottoman Turks, Greeks from Pontos seem to have called themselves after their particular patris (village/town) and clan.  From the early 19th century they called themselves after a particular village/town and then as subjects of the sultan.  However, by the end of the 19th century Greeks from Pontos were calling themselves Greek.  In 1922–24, when they were forced to leave Pontos and go to Greece, they were called Pontic Greeks.  When Greeks from the Caucasus (Soviet Union) arrived in Greece in the late 1930s they were called Rosoprosfiyes (Russian refugees).  However, the Greek state called all people of Pontic Greek descent Pontioi (Pontic Greek).  In the mid-1990s most Greeks with Pontic descent from the former Soviet Union defined themselves as Romaioi or the Russian term Greki (Greeks).  Ten years later many considered themselves Pontic Greeks.  The issue of identity of Greeks with ancestry in Pontos who came to Greece via the former Soviet Union is complex.

What we call ‘ethnicity’ is a mental and social construct.  What ethnicity we call ourselves is based on what we believe in our hearts and is a personal choice.

Notes
Note 1
After about 535 AD, the Eastern Roman empire used Greek as its official language.  In ancient Rome, there was no requirement that one know Latin to be a Roman.  Greek had always been a part of Roman culture and the Romans often referred to their ‘two languages’, Greek and Latin.  In the middle Byzantine period, on a popular level, the ‘Byzantines’ began to call their (Greek) language ‘Roman’, or Romaic, because they were Romans and that was their language.  In spoken Greek, the change to naming the language ‘Romaic’ was probably complete by 1050 (Kaldellis 2019, pp. 101–2 & 105).  See Topalidis (2019, pp. 30–31) on the Pontic Greek dialect.
Note 2
The East-West Schism of 1054 precipitated the final separation between the Eastern Orthodox churches and the Western Roman Catholic church.
Note 3
Michael VIII Palaiologus recaptured Constantinople in 1261.
Note 4
Today, the academically accepted term in English for Greeks from Pontos is Pontic Greeks.
Note 5
The Treaty of Lausanne was signed in July 1923 and formalised the terms of peace between Turkey and the Allied Powers that fought in World War I and in the Turkish War of Independence.  It formalised the end of the Ottoman empire (Encyclopedia of the Ottoman empire 2009).
Earlier, in January 1923, Greece and Turkey had signed the Lausanne Convention concerning the Population Exchange between Greece and Turkey.  This convention stated the compulsory exchange of Turkish nationals of the Greek Orthodox religion in Turkish territory and the Greek nationals of the Moslem religion in Greek territory.  The Greeks in Constantinople and the Muslims in western Thrace were exempt from this exchange.  The exclusion of the Orthodox inhabitants of the islands of Imbros and Tenedos was specified later in the wider Treaty of Lausanne (Hirschon 2003).
The Lausanne Convention legalised the existing situation.  That is, after August 1922, with the defeat of the Greek army in Anatolia, the vast majority of Greeks of Anatolia and Eastern Thrace had been forced to leave for Greece from the advancing army of Mustafa Kemal.  The Lausanne Convention determined that those Greeks who had not yet left for Greece were subject to the forthcoming compulsory Population Exchange (Klapsis 2014).
Note 6
A survey conducted in Greece by the General Secretariat for Repatriated Greeks reported that the number of immigrants from the former Soviet Union who remained in Greece between 1987 and the end of 2000 was around 155,300 people.  [Most of them were of Pontic Greek descent.]  From the turn of this century, the number of immigrants has become a ‘trickle’.  This total figure of 155,300 people is an underestimate because the survey was not compulsory (Vergeti 2010–11).  Just over 50% of these Greeks came from Georgia, around 20% from Kazakhstan, around 15% from Russia (Diamanti-Karanou 2003).]
Note 7
For the Greek society as a whole, the terms currently used to identify the post-1985 arrivals (from the former Soviet Union) are Pontioi, Rosopontioi (Russian-Pontic Greeks) and Rosoi (Russians).  Similar terms were used for those who arrived from the Soviet union in the 1960s and 1970s (Hionidou 2012, p. 108).

Acknowledgements
I wish to thank Russell McCaskie, Dr Violetta Hionidou and especially Professor Anthony Kaldellis for their comments to a draft of this paper.  I need to declare that I am an Australian citizen of Pontic Greek descent and all errors in this work remain with me.