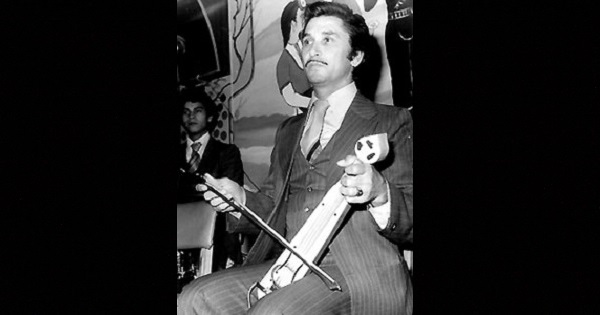 Konstantinos (Kostikas) Tsakalidis is a well known Pontic lyra player and singer. He was born in 1922 in Lendrakia, Drama, Greece and was the third of seven children born to Ioannis and Olga, refugees from Trapezunda (today Trabzon). From a young age he listened to his father and uncles singing and playing the Pontic lyra and at the age of 15 he began playing entire musical pieces, appeared in Pontic theatrical presentations, weddings and also folk festivals. The people of Drama loved and admired him, not only because he was young and talented with the Pontic lyra, but also because of his friendly and modest character and his ability to impress them at the various functions.

Tsakalidis did his national military duty in Veria where he also met Eleni, the woman he eventually married. Together they had 3 children; Athanasios, Olga and Ioanni (Pitikos).

In 1965, a 3 day Pan-Pontian event was organised in Fillipous, Kavala where he won his first instrumental music award for his ability to play the lyra. Not long after this, his first mini-album was released. With his maturity in the sphere of music growing, he began to leave a bigger mark on the Pontic music scene. The world now began to speak of his traditional ‘table song' presentations more so than any other Pontian musician.

Having noticed that Pontic youth were not interested in traditional styles of music, he decided to add other musical instruments, his own lyrics and his own tunes to his music and as a result he began to captivate the public.

In 1972 he moved to Athens and opened the first ever family oriented Pontic club on Platonas Street in Kallithea. He gradually created a following from all walks of life who visited the club not only to listen to his music but also to get to know him. Some of those people included musicians and actors and musicologists from abroad such as Leigh Cline, a guitarist/musicologist from Canada who spent an entire year with him to listen to him and to better comprehend the style in which he played traditional Pontic music. He then moved back to his home town where he released an album with his own music style, which included traditional Pontic music. 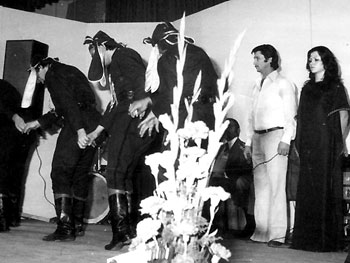 He met music composer Giannis Markopoulos and played in his orchestra in a film which starred famous actress Raquel Welch. In 1975-76 he partnered with Nikos Xylouris and Mariza Koch at the music hall Aposperida in Sina Street. He appeared in Theo Angelopoulos's film ‘Oi Kinigoi" where he had a small music and screen role. He then played a small part in an album by Christodoulou Chalari with the title ‘ Oi Drosoulites'.

He was a self taught musician from the age of 10 with no knowledge of music theory or study yet he managed to produce sounds with the Pontic lyra that music composers were looking for. He even added an extra string to the traditional 3 strings of the Pontic lyra so that the sound of the instrument was exactly what he and music composers wanted. He also began to manufacture his own instruments so that they can produce a tone to suit his own personal taste.

In 1977 he accomplished his lifelong dream. At his own expense, he toured the whole of Greece playing Pontic as well as folk, island, Cretan and other types of music. Playing Cretan as well as Greek folk songs with his Pontic lyra, he captured the hearts of Pontic people as well as the rest of Greece. This tour was his inspiration to later release an album with Pontic as well as other folk songs.

Some of his closest colleagues and friends included:

Among colleagues who admired him and who he also admired, were: Lazos Terzas and Harry Klynn both of whom stood by him during difficult personal times. 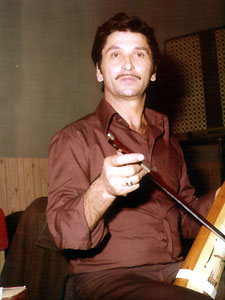 In 1979 he took part in the International Congress of Musicologists in Zagreb of the Former Yugoslavia Republic alongside ethno-musicologist and composer Eleni Karaindrou and other Greek musicians. On the 24th of August at the ‘Pizinisk', Tsakalidis (Pontic Lyra) appeared alongside the following performers: Halkias (Epirotika), Μountakis(Cretan) and Giota Bey (Interpreter)

On the following day, the Yugoslav media referred to Tsakalidis in the most flattering of ways. On the cover of an album, Mimis Plessas said that he had discovered the authentic music of Pontos and the beauty within Homer's myths in the music of a very decent and simple musician.

He also organised concerts abroad and in so doing, helped Greek refugee organisations.

In 1980, he fell ill while on tour in Germany. His tour was cut short and he returned to Greece where his personal battle began. The battle lasted for two years and in the process he discovered a love from the general public, a love which softened the pain of his illness. Throughout this time, his family, relatives and also friends constantly showed their support by being by his side. His last wish was to be buried beside his father. His last words were:

‘I leave. Goodbye my noble people'

In 1995, the Pontic program ‘Euxinus Lesxi - Radio Station Imathia' requested that a section of his hometown be renamed in his honor. The request was accepted and the public square adjacent to where Kostika made his final appearances was renamed ‘Kostikas Tsakalidis Square'. A bust of Tsakalidis was also erected in the square.

Paris (reporter): ‘Kostikas may have passed on, but he leaves behind his immortal songs. It's like he lives within all our hearts. Whoever listens to his lyra and his music, will experience a burning tear in their eye, a tear of memory within them. His friends were in the thousand and countless. ‘

Mimis Plessas: ‘You, the lucky people, will drink from the authenticity of Pontian music, through the honest words of Kostikas, before even we, the skillful and dexterous, have a chance to dim the clarity and cleanliness of it'

Euxinos Lesxi Veria (Dance group, early 1980's): ‘To this brilliant human being and musician, we the younger generation who had the chance to meet him in person and to love him, owe him the greatest honour for passing on to the next generation our experiences, his values and contribution.'