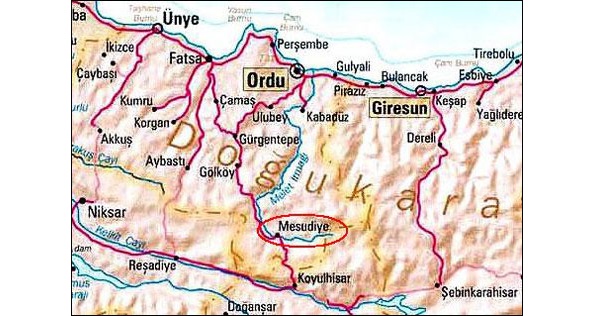 Melet was the name of a village and a town, but also the name of one of the seven provinces in the Nicopolis (Tr: Sebinkarahisar) region of Pontus. Its current name is Mesudiye (formerly Hamidiye) but its earlier Greek names were Meletios, Melet or Milas (Mελέτιος, Μελέτ, Μήλας). The name was probably derived from the Melanthios River (Tr: Melet Irmak) which runs through it and down to Ordu. Matuasco is also another name associated with it.

Τhe Melet Irmak springs from the sides of Karagiol (Καραγκιόλ) and Karadag (Καραντάγ) and flows to the valley of Mesudiye and travels towards Ordu and to the east of Ordu it empties into the Black Sea. The name Melanthios is believed to derive from the Greek word μελάνη (ink) to describe the dark and shady colour of its waters. The river is said to pass through dense and shady forests hence its dark color.

Of the 2,000 residents residing in Mesudiye, 1,500 were Turcophone Greeks , a small number were Greek-speaking Greeks and the remainder were Turks and Armenians. The Greek section of the town comprised two churches; Saints Konstantinos and Eleni and the Dormition of the Virgin Mary. There was also a Greek school and high-school which was built by the benefactor Konstantinos Tapinos. The Armenian residents of Mesudiye were exterminated in 1915 while the Greeks were exiled and killed between 1916-1923. Very few survived and made their way to Greece. It is postulated that the name Hamidiye was derived from the word Medea (Gr: Μηδεία) but without certainty.

View a list of the Greek settlements of Melet