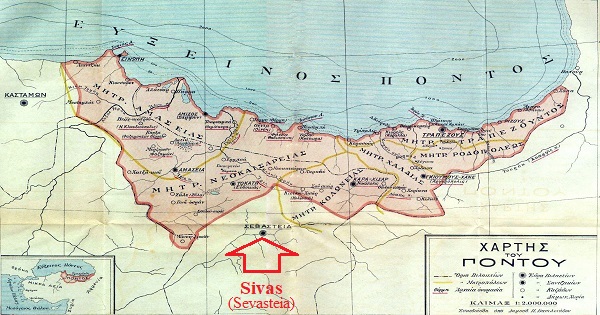 Sivas which is known by Greeks as Sevasteia (Gr: Σεβάστεια) was in earlier times called Suvaz and was an ancient Pontic town and now a seat of a prefecture in Turkey. The town was built at the foot of Mount Paryadris (Gr) and 2km from the Ali/Halys River (Tr: Kizilirmak). The town is an important communal link for Turkey. Close to the town is a road that links the northern regions of Asia Minor with Kayseri as well as the road that leads to Baghdad. There are three bridges in the region which pass over the Kizilirmak. One was built during the Roman era and leads to Tokat while the other two are for roads leading to Kayseri and Baghdad.

View a list of the Greek settlements of Sivas

It's believed that modern Sivas isn't located at the site of ancient Sevasteia. A number of archaeologists believe ancient Sevasteia is located 8km from today's town at a village named Gavras (Gr: Γαβράς) which is close to the Kizilirmak. According to many researchers ancient Sevasteia was called Kavyra (Gr: Κάβειρα). Oeconomidis identifies Neocaesarea as being close to Kavyra. Later, Pompey renamed it Diospolis (Gr: Διόσπολη) and Marcus Antonius passed it over to the son of Pharnaces and grandson of Mithradates VI. Later, it came under the rule of Polemon and following his death his widow Pythodora renamed it Sevasti to honor August which the Greeks referred to as Sevasto.

In close proximity to today's Sivas was the Lake of Sebaste where the 40 martyrs were killed. S Ioannidis who visited the region in the mid 19th century mentioned that the lake had all but dried up. Following the Persian Wars, Justinian paid extra attention to the town and built walls around it while during the years of Procopius a large fortress was built in the centre of the town. In the 11th century the Armenian king Synecherin swapped the district Baspurakan in his own country, with Sevasteia which thus became the capital of Armenia Minor. The town was later ruled by the Seljuks, Ottoman Sultan Beyazit I (1397) and Tamerlane (1400). Tamerlane had ordered his cavalry to trample over 4,000 children of the town following his retreat from the town and subsequent handing back to the Ottomans. 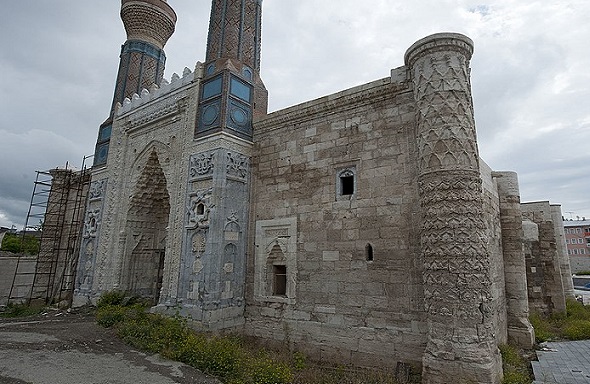 The Gök Medrese is a 13th century Islamic educational institution built by Kaloyannis of Konya. Source

Sevasteia has many buildings and monuments including an Armenian Monastery (Holy Cross) which is believed to have been built by the Apostle Thadaio and the Gök Medrese which was built by Kaloyannis of Konya/Iconium (c. 1272). According to S. Ioannidis close to the town there were well known salt works as well as mines. Wheat, legumes and fruit were also in abundance in the region. Before the exchange (1923), the Greeks had a church (Saint George) which was formerly an Armenian church, as well as a primary school.

When the Greeks of Pontus were being persecuted by the Neo-Turks beginning in 1916, Sivas was the destination for those who were being ‘re-settled' or in effect being sent on death marches. During the same period, in September of 1919, the Sivas Congress took place. The call for the congress was made by Mustafa Kemal three months earlier. It was at the Sivas Congress that vital decisions were made which determined future policies in the War of Independence. On the 2nd of July 1993, 37 people, mostly Alevi, were massacred in what is now known as the Sivas massacre. The victims, who had been gathered at a cultural festival were massacred when a group of radical Islamists set fire to a hotel where the Alevi group had been gathered.