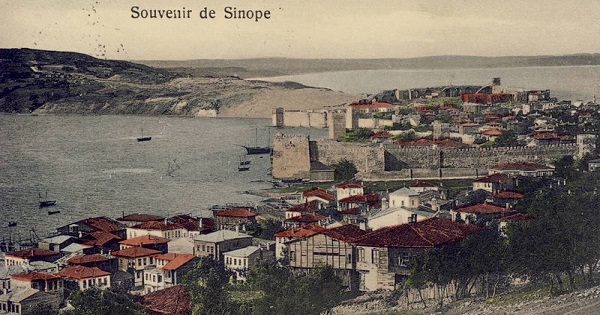 Sinope (Σινώπη, Sinopolli, Sinub, today Sinop) the ancient city of Pontus was founded by the Miletians in the 7th century BC. According to mythology its founder was the Argonaut Autolycus. The region was well known by Phoenician seafarers who traded with the pre-Hellenic people, the Assyrians. Apart from the Miletians, the Cimmerians have also been mentioned as settling in Sinope after fleeing from the Scythians.

According to ancient writers, the Miletians founded Sinope after an agreement with the town's native people. A myth associates the town's name with that of the nymph Sinope, daughter of the river God Aesop (Grk: Ασωπού)

Sinope was the first Greek colony of Pontus. Soon after being colonised, Sinope's population increased dramatically. The ‘barbaric' people either moved out of the region or assimilated. According to Herodotus and Xenophon, Sinope increased so drastically in wealth that it founded other colonies such as Trapezunta (Trebizond), Kotyora (Ordu) and Kerasunta (Kerasus). Xenophon mentions that according to the customs during that period the people of Kotyora, Kerasunta and Trapezunta all paid a tax to the Metropolis who then sent governors to their towns. According to Xenophon, these governors complained many times to the Myrian leaders about better representing Sinope. It is unknown whether this dependence existed after the late 7th century BC.

During this same period (end of the 7th century BC) Sinope was a member of the Athenian alliance. Pericles and Lamachos visited Sinope and helped to overthrow the tyrant Timiseleos. During this period 600 Athenian clerics established themselves at Sinope.

In 375 BC, a Persian named Datames, the satrap of Cappadocia launched an attack on Sinope and managed to seize it for a small period of time, however his actions turned out to be in vain. In 368 BC he returned and this time he managed to make a complete seizure of the town. Despite this, he respected the prior administration of the town and as a result included Sinope in the Persian state (in name only). During the years of Alexander the Great, Sinope constituted a part of his empire and in time it was passed on, at least in name, to his successors.

In 220 BC, Sinope was seized by Mithradates IV, King of Pontus, despite the help of the Rhodesians (Ρόδιοι) who were allied to Sinope. In 183 BC, Sinope was taken over by Pharnaces I, the successor of Mithradates IV, who made it the capital of his state. Pharnaces I and later his successors, all contributed to building amazing buildings and temples. Mithradates VI Eupator who grew up and was later buried at Sinope, showed extreme interest in beautifying the town during his years as king. According to Strabo, Sinope was beautifully decorated with temples, stoas and groves however they encountered various catastrophes during the Mithradatic Wars. 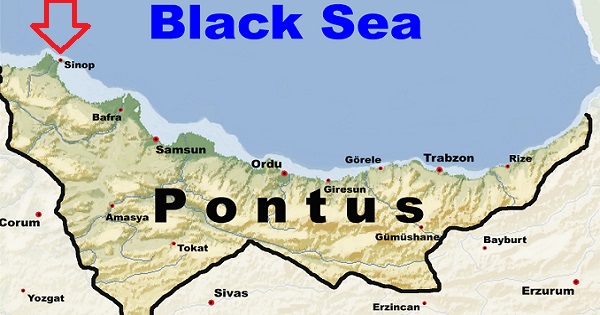 The town was seized in 70 BC by the Roman Lucullus however it again regained its independence and so didn't merge with the Roman Empire. In 47 BC it found itself under the rule of Pharnaces II however not for long; the Romans forcing him to flee. It became a Roman colony in 44 BC and many Roman legions moved there and began subdividing and sharing the land with the Sinopites. During the Roman period Sinope initially constituted a part of Bithynia but later became a part of Galatian Pontus.

During the Byzantine years, Sinope decreased in importance, however it became a part of the Armeniac Theme (Αρμενιακών). It remained under Byzantine administration until the middle of the 11th century at which time it was seized by the Turkish emir Hartik. However it was regained in a short period of time by Alexios Comnenos. After the sacking of Constantinople by the crusaders of the 4th crusade it became a part of the kingdom of the Comnenian rulers for a period until it fell to the Seljuks of Iconium in 1214. During this seizure of Sinope, David Comnenos the brother of the first Emperor of Trebizond Alexios I was killed. Later, Sinope was to become a semi independent Turkomanic emirate governed by the Sfentiar family (Ισφεντιαρογλου). In 1462, the last Emirate of Sinope Ismail handed it over to the Ottoman sultan Mohamed II who forced many of the Greek residents to flee (to Constantinople) so that he could populate the town with his on people.

The church of Sinope

According to many sources Christianity in the region was declared by Apostle Andrew. The first bishop of Sinope was the gardener Phokas. The cult of Saint Phokas became the most popular in the Euxine.

D.Oikonomidis writes, that in 1869, the population of Sinope numbered 15,000 and that 3,000 were Greek Orthodox who were dependent on the Diocese of Amaseia for religious purposes. These Greeks ran their own Greek schools (girls' schools and municipal schools),. Of the villages in the region, six were inhabited by Greeks, the total of Greeks equating to approximately 4,500 of the 15,000 in total. The Greek schools were sufficiently run by the Greek community and included a Greek community civic school comprising 8 classes and 6 teachers and 400 students in total as well as a single grade kindergarten.

Prior to 1914, Sinope was inhabited by 9,000 Muslims and 5,000 Greeks. The number of Greeks living in the surrounding villages was 5,000. Many of these Greeks became victims of genocide. Those who survived were resettled in Greece as part of the Exchange of Populations between Greece and Turkey.

Lost monuments of Sinope as mentioned by Strabo include the agora, stoa and gymnasium.and a number of churches. By the end of the 19th century there were 15 Orthodox churches in the kaza (of Sinope). Most it appears have been lost. Some of its pre-Turkish surviving monuments include the street plan, its walls, the palace (Balat) and its church (Balat Kilise). 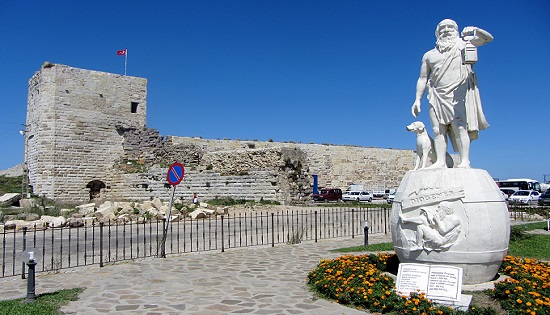