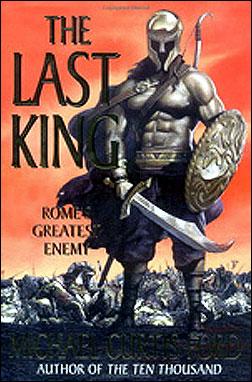 To the Romans, the greatest enemy the Republic ever faced was not the Goths or Huns, nor even Hannibal, but rather a ferocious and brilliant king on the distant Black Sea: Mithridates Eupator VI, the last king of Pontus, known to history as Mithridates the Great.  At age eleven, he inherited a small mountain kingdom of wild tribesmen whom his wicked mother governed in his place.  Sweeping to power at twenty-one-years-old, he proved to be a military genius and a man intent on ousting the Romans from the Black Sea coast territories.

For over forty years, Rome sent its greatest generals to contain Mithridates, but time and again he embarrassed the Romans with devastating defeats. Each time Rome declared victory, Mithridates considered it merely a strategic retreat and soon came roaring back with a more powerful army than before.From the author of the acclaimed The Ten Thousand and Gods and Legions, comes a fascinating recreation of a wickedly cunning and ruthless king who would stop at nothing to protect his people-and who would go down in history as one of the greatest and most formidable warriors of the ancient world.