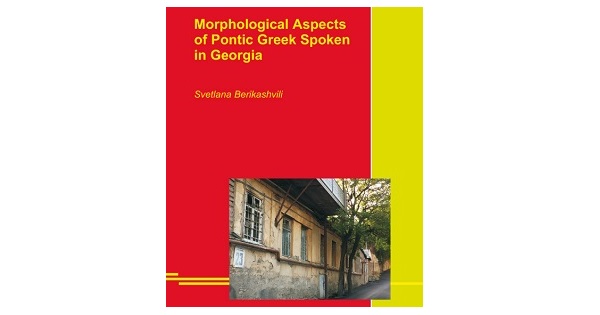 The present book offers a morphological description of an endangered variety of Greek, namely Pontic Greek (also called Romeika) spoken by the Pontic community of Georgia. This variety of Pontic displays the general features of Pontic Greek, i.e., it preserves several archaic (Hellenistic or Medieval) elements, shows a breakdown of the grammatical-gender distinction, inflectionally active animacy hierarchy etc. Furthermore, the examined variety shows some innovations: it differs from the Pontic Greek varieties spoken in Turkey or in Greece, in terms of contact-induced changes.

The influence of the contact languages, having either concatenative (Turkish, Georgian) or non-concatenative morphology (Russian, Standard Greek) always induced several processes of language change through the transfer of single words or constructions. So, the understudied variety has undergone changes not only on the lexical, but also on the structural level. The present book is part of the outcome of the project The impact of current transformational processes on language and ethnic identity: Urum and Pontic Greeks in Georgia (2013-2017; principal investigators: Stavros Skopeteas, Bielefeld University, and Konstanze Jungbluth, Europa-University Viadrina, funded by the Volkswagen Foundation).