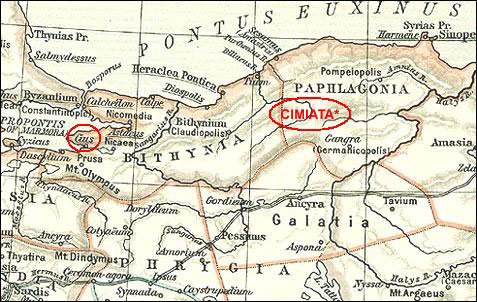 Circled is Kios(Cius) and the approximate location of his fortress Cimiata in Paphlagonia.

More commonly known as Mithridates Ctistes (Grk: κτίστης) or Mithridates III of Kios, he is widely considered as being the founder of the Kingdom of Pontus. The word ‘ctistes' means ‘founder' or ‘builder' in Greek. He was of the same age as his friend Demetrius Poliorketes, so it's believed he was born around 338BC. He ruled for 36 years between the years 302 - 266 BC. He descended from the upper echelon of Persian aristocracy. His father was Mithridates II of Kios, who inherited a fief at Kios (Trk: Gemlik) west of Bithynia on the Propontis (Sea of Marmara).

Mithridates' father Mithridates II of Kios, was killed by Antigonus in 302 BC and so he inherited his father's dynasty. In the same year, Mithridates was warned by his friend Demetrius that his life was also in danger from Antigonus, and as a result fled and established himself at his fortress at Cimiata, in Paphlagonia. Here he ruled for 36 years and at some stage proclaimed himself King of Pontus, with Amaseia as capital.

After conquering at first much of Pontic Cappadocia, he continued at great pace in conquering all of Pontus, leading to a breakaway from the Seleucids (281 BC). He then joined the Northern Alliance (Enosi) which comprised the independent cities of Heracleia, Halkidona, Byzantium, Kios and Tios against King Seleucid I (358-281BC). He in turn worked together with the King of Bithynia, Nicomede I towards the formation of a Galatian state in Phrygia.

In his attempt to extend his acquisitions up to the shores of the Euxine he began conquering the rich seaside cities eg Amastris (Amasserah), Sinope, Amisos, Kotyora, Themiskyra, Pharnakeia, Kerasunta and Trapezunta, however he wasn't entirely satisfied with his accomplishments. He was succeeded by his son Ariobarzanes I (266 - c.255BC) who conquered Amastris but didn't manage to extend his state because he died during an invasion by the Galatians.

References
* Encyclopaedia of Pontian Hellenism. Malliaris Paedia
* The foreign policy of Mithridates VI Eupator, King of Pontus. By B. C. McGing
* Decline of the Roman republic, Volume 2 By George Long
* The Cambridge ancient history: The last age of the Roman Republic, 146-43 B.C. By J. A. Crook, Andrew Lintott, Elizabeth Rawson