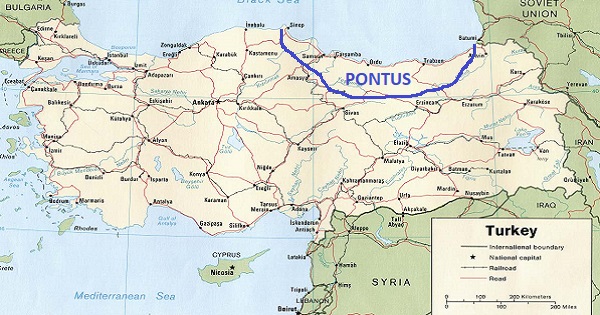 A rough outline of the Pontus region. Source: University of Texas Libraries

Axenos Pontos (inhospitable sea) was the name given to the body of water we know today as the Black Sea. It was later renamed Efxinos Pontos (friendly sea). The name Pontus eventually came to identify the north coast of Asia Minor stretching from Sinope in the west, as far as the Georgian border to the east; a land of high mountains, deep valleys and natural harbors. Greek merchants first established trading posts along this shore some 3,000 years ago; outposts that grew into villages, towns and cities.

Like their better-known mother-cities along Asia Minor's Aegean shoreline, the Pontic cities produced great philosophers like Diogenes of Sinope, geographers like Strabo, and many other people of learning. Protected by the towering Pontic Alps, the region has a long tradition of independence. The Kingdom of Pontus which was ruled primarily by the six Mithridates kings (I-VI) was a Greek state which lasted from 291 BC up until the Roman conquest in 63 BC. The Roman period followed and then the Byzantine period during which Pontus experienced periods of enormous prosperity. Following the fall of Constantinople to the Fourth Crusade (1204) the Empire of Trebizond was created as an independent successor state by the Comnene rulers. The Empire of Trebizond was the last Greek-ruled territory to fall to the Ottoman Turks in 1461.

As with Cyprus, Pontus's isolation assisted in the retention of many linguistic elements of Greek, long lost by the rest of Hellenism. The Pontic dialect is arguably one of the most archaic forms of the language still spoken today. Many Pontic speakers today live in Turkey and are Muslims, whilst the majority live in Greece. Pontic folklore is also archaic. The Pyrrihios (or war dance), was a part of Hellenic culture at least 2,500 years ago, as evidenced by friezes from the 5th century BC. Pontic Greeks will often refer to this dance as Serra, whilst Pontic Muslims refer to it as Horon.

Although the Pontic Greeks had a reputation of being fierce fighters, this did not help them during the period 1914-1923 during which an estimated 353,000 Greeks of Pontus were massacred at the hand of the Neo-Turks and finally the Kemalists. The fate of Pontus and its people was completed following negotiations at Lausanne and the compulsory Exchange of Populations between Greece and Turkey which resulted in all Orthodox Christian Pontic Greeks being uprooted to Greece. Pontic Muslims were allowed to remain. Today these Muslims continue to speak Romeyka (or Rum), a dialect which descends from the Eastern Roman (or Byzantine) Empire. 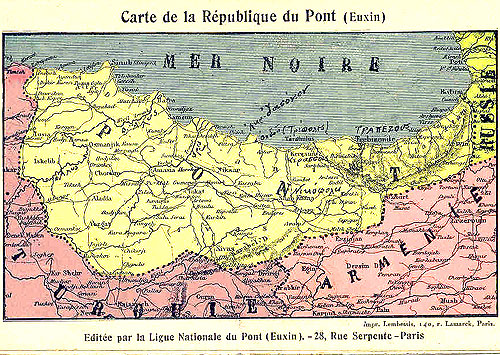 A map of the proposed Republic of Pontus which was touted at the Paris Peace Conference in 1919 but did not eventuate.