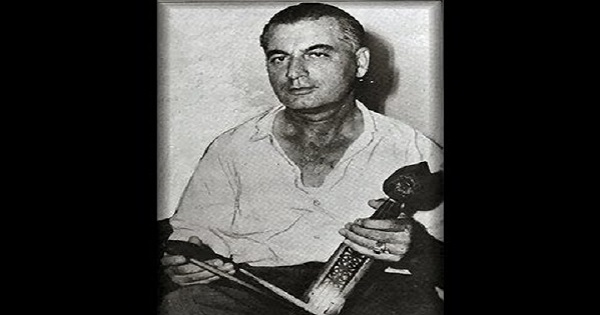 Giorgos Petridis, (aka Gogos) was born in Trabzon*, Pontus in 1917. He is renowned as the finest exponent of the Pontic lyra. After the exchange of populations between Greece and Turkey in 1923, Petridis' family established themselves in Kalamaria in Thessaloniki, Greece. His father Stavri Petridis was a renowned Pontic lyra player and singer.
Gogos' love for Pontic music started at a young age mainly due to exposure to his father's music. At the age of 10 he started playing the lyra. As an adolescent he was able to entertain at weddings and other social functions. At the same time he was also learning to play the bouzouki. 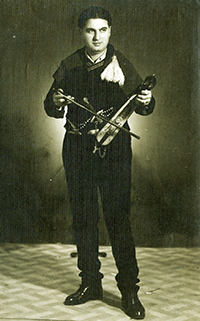 By the 1950's, Gogos had become widely known as the finest player of the Pontic lyra. His mastery at playing Pontic music led to him playing other styles of music on the lyra too. His fans soon named him the ‘Patriarch of the Pontic Lyra' a name which is still used to refer to him today. He gained admiration for his ability to produce the sounds of the violin and the bouzouki from the Pontic lyra. As a result, many considered him a perfectionist, while others were of the view that he was altering the sound of traditional Pontic music.

What's certain is that Gogos influenced many modern lyra players and left a lasting impression on all those who saw him play live, or listened to one of the many albums or cassettes he left behind. Τhe style with which the Pontic lyra is played today is very much the result of Gogo's influence on Pontic music.

Gogos also played alongside famous Pontic singer Chrysanthos many times. The Gogos-Chrysanthos combination will probably go down in history as the finest Pontic music has ever seen, their performances thrilling audiences worldwide.

While performing at Niko's Bouat in Thessaloniki one day, music composer George Manisalis who happened to be in town, dropped in to watch the performance. After the session he said the following: "There are only two musicians who have impressed me thus far in my life. One is a French violinist. The other is Gogos."

A bust was erected in honor of Gogos Petridis at his home town Kalamaria and is located just outside the Town Hall. He left behind three sons (Stavro, Savva and Kosta) all of whom have taken a keen interest in music.