Eupatorium: The plant named after Mithridates Eupator of Pontus 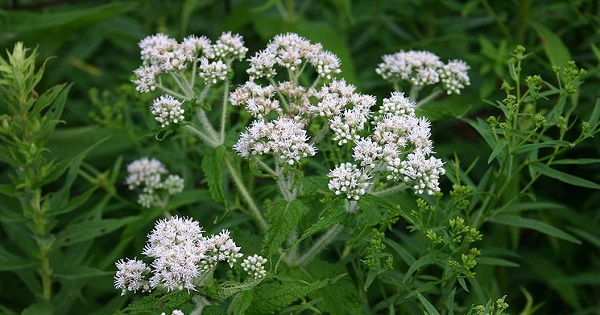 Eupatorium is a genus of flowering plants containing up to 60 species depending on the classification system. They are broadly known as Thoroughworts, Bonesets or Snakeworts and mostly grow in sunny places and the edges of rivers. The genus name Eupatorium is believed to have been assigned to the plant in honor of Mithridates VI of Pontus, otherwise known as Eupator Dionysius (132BC - 63BC).

Mithridates VI had a tremendous memory and spoke 25 languages. He sought to strengthen himself against poisoning by taking less than lethal doses of poisons on a regular basis. This practice came to be known as Mithridatism. A universal antidote for a poison is sometimes referred to as a Mithridate.

Eupatorium perfoliatum is otherwise known as Boneset.  Mithridates is believed to have used this plant for medicinal purposes. Boneset has been used as a laxative, tonic, emetic, analgesic and to break up colds and fevers. It can be toxic at certain doses.
EUPATORIA (MAGNOPOLIS)
Some sources state that Eupatorium was named after the town Eupatoria in Pontus where the plant grew abundantly near one of its rivers. Mithridates VI built Eupatoria at the junction of the Lykos and Iris (Yezil Irmak) rivers. When the town surrendered to Lucullus, Mithridates returned to Pontus in 68 BC and destroyed it.  Pompey later rebuilt the town and renamed it Magnopolis.