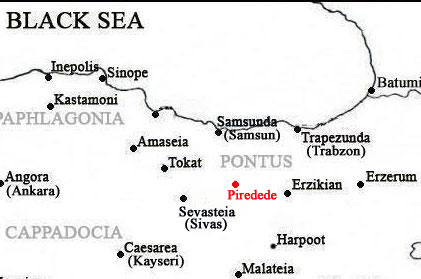 Piredede (Gr: Πιρέδεδε) is a village situated 9 kilometers east of Imranli in the Pontus region of Turkey. The village still exists and has kept its name. It was surrounded by Kurdish villages and was inhabited by 300 people, primarily farmers who maintained their own church and school. Most of the residents of the village perished and only a small number managed to find their way to Greece after many attempts. The teacher Efstathios Peliadis, who had a vision to open a Central Urban School in the region, was from Piredede. He taught in various schools in Tokat but was later displaced to Malatya.