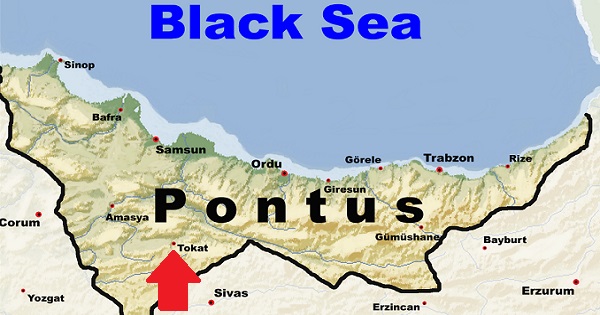 Tokat (Grk: Τοκάτη) is a town and province in the western region of Pontus. During the Ottoman period the name Tokat was the name of the district and the sanjak which the town was situated in. The Tokat district was also known as Kazova (Grk: Κάζοβα) and consisted of 82 churches. It also comprised 67 boys schools and 12 girls schools which were under the supervision of 94 teachers. In total 2,878 pupils attended these schools.

Administratively the sanjak belonged to the vilayet of Sivas. It was divided into 4 kazas; Neocaesarea (Trk: Niksar), Erpaa (Trk: Erbaa), Tokat and Zile. According to Leon Maccas the district of Tokat was made up of 5,757 Greeks just after WW1 (1918). Oeconomides states that prior to WW1, Tokat had 40,000 residents of which only 1,000 were Greeks, 15,000 were Armenians and a small number were Jews. Note: when assessing population figures, it is unsure which administrative regions the author took into account.

This list of the Greek settlements of Pontus (or villages where Greeks resided) was compiled by the Center of Asia Minor Studies (Κέντρο Μικρασιατικών Σπουδών) based in Greece. The list may exclude some villages which weren't known at the time the study was completed. Source: The History of Pontian Hellenism, Christos Samouilidis, Thessaloniki 1992.