Canca and the Tzanichites of Pontus 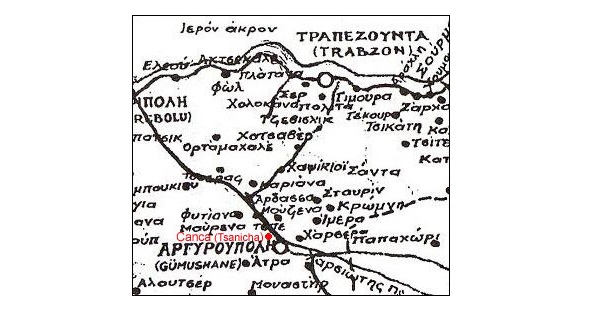 The Tzanichites (Gr: Τζανιχίτες) were an aristocratic family from Tzanicha/Tzangchi/Zangcha (Gr: Τζάνιχα/Τζάγχη ή Ζάγκα, Tr: Canca) of the central Chaldia region of Pontus. They played important roles for the empire of the Grand Comnenes in particular on the outskirts and borders of the Empire. According to Bryer, after 1355, the Tzanichites took the positions that the Kabazites had in the Empire; that of dukes (δούκες) of Chaldia. The most famous of the Tzanichites were, Theodore, Ioannis, Sevastos, Stefanos, Michail and two Constantines. Canca is situated 3km NW of Gümüşhane.

Theodore Tzanchites is mentioned in a body of text of 1306 (during Alexius II). M. Panaretos attributes the title of επικέρνη/πιγκέρνη to Ioannis Tzanichites in 1330-55. Ioannis rebelled in 1352 and seized the castle of Tzanicha but was defeated by Alexius III. Sevastos Tzanichites who was born in 1295, held the office of major in the military camp and contributed in an attempt to overthrow Eirene Palaiologina (1341), the end result being the overthrow of the noble personnel from the fortified monastery of Saint Eugenius. He was later deported to Limnia and executed.

Stefanos Tzanichites is mentioned as the senior κοντόσταυλος in the period 1344-1350. Michail Tzanichites took part in a naval attack on the Trapezuntine naval fleet outside of Kafa (1349) and was killed in the battle along with Ioannis Kabazites. Of the two Constantines, the first is mentioned in the codes of Vazelon as senior/grand κοντόσταυλους and leader of the Bandon of Palaio Matzuka during 1365-1386. According to the Vazelon codes, the second Constantine was head of the same Βandon during the year 1415.

Bryer states that at Tzanka (Canca) exists the remains of an old castle and two chapels. The castle is located on an elongated spanse of land 2km northwest of modern Gümüşhane, and 400m above the south bank of the Kanis (Harsit). Both chapels contain paintings or inscriptions of Christian figures of the church.