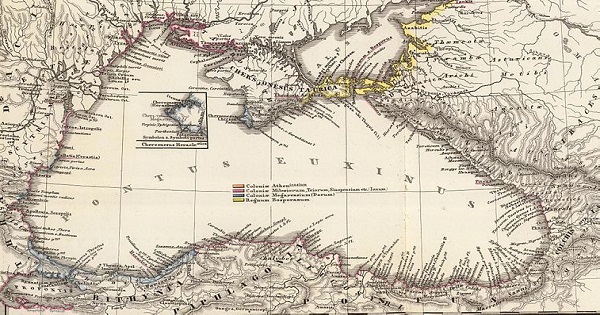 The term Euxinus Pontus is the Latinized version of the Greek Eύξεινος Πόντος (pronounced Efxinos Pontos) and is the historical name commonly used to describe the body of water we know as the Black Sea. The Euxinus ‘εύξεινος' part of the term which means ‘hospitable' is believed to be a euphemism of aksenos (Gr: άξενος). Aksenos means inhospitable and is believed to describe the difficulty in navigating the water and also the savage tribes that historically surrounded it. The name later changed to Efxinus after the Miletians colonized it and made it part of Greek civilization. In French, the Black Sea is called Mer Noire.

The father of history Herodotus mentions Pontos in a different way. While he is aware of the Euxine, he doesn't describe the word as being the north-eastern region of Asia Minor. On one occasion he talks about the interior of Pontos by implicating it with the region of Europe that is directly exposed to the waters of the Euxine. He also uses the word Pontos to describe the Mediterranean Sea. While Herodotus knows the races of people of the region quite well, he appears to have wrong ideas about the northern region of the Euxine.

The term ‘the Pontos' or simply ‘Pontos' from the 5th century BC onward starts being used to describe the Euxine and is used in this context by Aescilus, Thucidide, Euripides, Aristophanes, Aristotle, and others. The epithet ‘Ponticus' also starts being used to describe the people who lived around the shores of the Euxine and later to describe those who lived in all of Pontus eg Heraclides Ponticus. Xenophon (c. 430-354 BC) however is the first Greek writer to travel to the region, meet the different races and write a concise report of his travels. 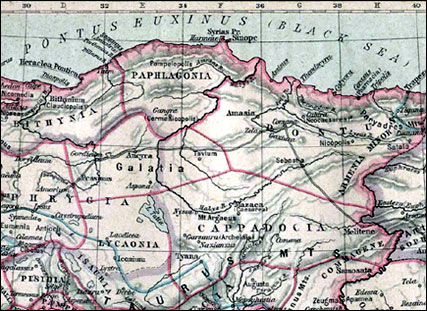 In the last Greek/Roman years, the name Pontus is used in combination with other names such as Galaticus, Cappadocicus, Polemoniacos.

In an article titled The Name of the Black Sea (Cambridge University Press, 1947) W.S Allen suggests that the early people of Iranian speech (Scythians, Sarmatians or the like) who were living on the northern shores of the Black Sea gave it a title which described its appearance, αχsaena (or something very similar) which meant ‘dark coloured'. When the first Greeks (Aeolians) arrived in the Hellespont on occasional trips to the Black Sea, it brought them into contact with the Iranians, and the name they had given to the sea. The early Greeks however were not lovers of the sea, and therefore decided to change the name to the more familiar 'aksenos' (Gr: αξενος). When the Ionians finally came to settle along the shores of the Black Sea, the name ‘inhospitable' could no longer be used, and so was changed to the euphemistic word 'efxinos (Gr: εύξεινος) partly because they were going to live with these new people and also because they didn't want to refer to it as being something so unfriendly.

A.C Moorhouse writes that ό εύξεινος πόντος which translates to ‘the hospitable way' later changed to become ‘the Black Sea'. He says that the word Pontos could possibly derive from a series of words, including Gr: πάτος (trodden path), Skt: pdnthah (way), Arm: hun (ford, road) Lat: pons (bridge). The nouns here mean ‘way' and in particular a way that goes over or through water. Moorhouse also argues that the word Pontos does not mean sea unless it is used with its familiar Greek companion, 'efxinos'. He says that 'efxinos pontos' can be explained, but 'pontos' alone cannot.

Moorhouse also states that 'o aksenos pontos' meaning Black Sea must have been in existence before the time of Homer and his poems. He rules out the Greeks, and says that the people concerned were known to history as Phrygians, Armenians, Mysians, Bithynians, Thyni who migrated on a large scale from Thrace to Asia Minor. While some migrated through the Hellespont or Bosporus, others took the sea passage over the Euxine which led to the name ‘the inhospitable way' and that from this Thracian source it then spread to Greek.