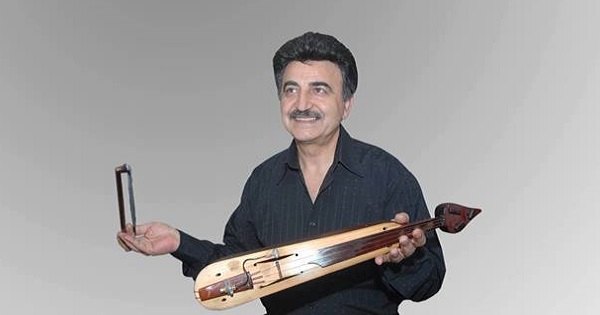 Michalis Kaliontzidis is a professional Pontic lyra musician born in the village Dipotamos, Kavala in Greece in 1960. Both his parents were from Pontus. His father Christos was from the village Kozma in the region of Maçka, a region in the Trabzon province. His mother Anatoli was from Trabzon. At a young age, his father moved to Constantinople and in 1922 moved to Greece as part of the Exchange of Populations between Greece and Turkey. Christos was an excellent chanter and had an incredible knowledge of Byzantine music.

Michalis Kaliontzidis heard the Pontic Lyra for the first time through his father, and by 1976, aged 16, started playing the Pontic lyra at weddings, christenings, name days, muhapetia (social gatherings), festivals and other social events. His breakthrough in the professional arena came about in 1981 when he played in concerts organised by Christodoulou Halari, where he accompanied the great Pontic singer Chrysanthos. His association with Chrysanthos was to last for many years to come. 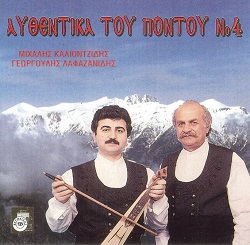 In 1982 he enrolled at the Eugenidio Conservatory Kallitheas in Athens (Ευγενίδιο Ωδείο Καλλιθέας Αθηνών ) where he continued his studies, eventually reaching the Fugue stage. At this time he also released his first vinyl album titled ‘Retrogression in Pontus' (Αναδρομή στον Πόντο). Since then he has released a total of 45 albums and CD's either alone or in collaboration with other musicians. He traveled to U.S.A and Canada over 30 times, as well as other countries like Australia, Japan, Egypt, Russia, Turkey and other European countries, performing and playing the traditional music of Pontus.

He has worked with all the Pontic musicians, most of whom he has released albums and CD's with. He has made vital recordings with interpreters - genuine translators of Pontic songs (non professionally), not the type of music which has degraded in many respects over the years. He has collaborated with leading singers and composers such as: Christodoulou Halari, Vangelis Papathanasiou, Christos Nikolopoulos, Giorgos Chatzinasios, Thanos Mikroutsikos, Giorgos Koro, Harry Klynn, Giorgos Dalaras, Marisa Koch, Petros Gaitanos, Lizeta Nikolaou, Katerina Korou and the interpreters of Demotic songs: Domna Samiou and Chronis Aidonidis.

Apart from his usual course of work, and of note, was his long time collaboration with Lambros Liava, whom he collaborated with in all his traditional concerts and many other appearances, in places such as the Palace of Music Athens (Μέγαρο μουσικής Αθηνών), the Odeon of Herodes (Ηρώδειο) , the Epidaurus (η Επίδαυρος), the Lykavitos (ο Λυκαβηττός) and the Megaro of Music Thessalonica (το Μέγαρο μουσικής Θεσσαλονίκης). An important and unique experience was when he played at the Metropolitan Opera of New York accompanying Giorgos Dalaras and Lydia Koniordou. In this particular performance, the Pontic lyra was accompanied by the New York Symphony Orchestra. The entire performance was directed by Kosta Gabra.

He first appeared at the Palace of Music Athens in 1991 playing Pontic Lyra in an Indian theatrical work titled Ramagiana (the equivalent of the Iliad). He wrote the music for the film Extracts of Alkisti of Euripides (Αποσπάσματα της Άλκηστης του Ευριπίδη) which progressed to the Motzarteum Salzburg in Austria. He also conducted and directed the orchestra in Theodorou Kanonidis' Pontic play "The Refugees in Greece" which progressed to the State theatre of Northern Greece. He also wrote the music for the Pontic play The Hair's bridge (Τη Τρίχας το Γεφύρ') and participated in the 45 presentations of the play by the State Theater of Northern Greece, directed by Ermi Mouratidis. He also participated in the presentations of the above 2 mentioned plays.

In 1988 he formed LYRA (The Pontic Lyra Faculty of Learning) in Kallithea, Athens where up until today 12 faculties work in collaboration with teachers that have graduated from the faculty itself. Apart from Athens, faculties also exist in the following cities: Thessaloniki, Kavala, Kilkis, Katerini, Veria, Kozani, Kopanos Naousis, Kria Vryssi Giannitson, Drama, Preveza and Anatoli Ioannineon. In the past two and a half years he has been an instructor at the Educative Institute of Technology Ipeirou Artas (Τ.Ε.Ι. Ηπείρου Άρτας). He has a choral ensemble in Athens and Thessaloniki, and has also done many concerts with the 30 member Lyra players group, and the 40 members of the choral ensemble, accompanied with a traditional orchestra, the end result culminating in the lead performance at the Panagia Sumela festival on the 14th of August 1994 in front of 20,000 people. He also appeared with the choral ensemble in Nicosia, Cyprus in an international festival of choruses in 2002.

He has also written recordings for three monasteries of Pontus: St George Peristereota, St John Bazelona, and the Church of the Virgin Mary Laloglis (in the region of Kars, Pontus). He has been invited to Germany, France and America for seminar presentations on Pontic music and also within Greece at the theater of music at the Conservatory Drama (Ωδείου Δράμας). He has been honored by many Pontic associations for his work and dedication to the Pontic sphere, in particular by the Association of Dipotamou in Toronto Canada in 1988, the association Dipotamou Kavala (his home town), and also by the Pontic Leschi Kavala under the presidency of the late Ioannis Pentazidis.